Naperville’s Opportunity: Ban Sales of Dogs and Cats at Pet Stores, Here’s Why 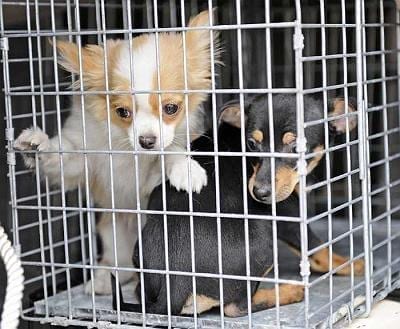 Naperville, located West of Chicago, is more than just another big town suburb. With nearly 150,000 residents, Naperville is hardly a tiny sleepy town. In fact, Naperville is the best city to live in America, according to NICHE.com.

Naperville is famous as a family-friendly community. How do parents in Naperville defend the selling of puppies from commercial facilities and horrific puppy mills to their children? 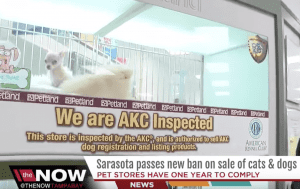 So, what’s the problem with pet store puppies?

For starters, no responsible breeder will EVER sell to a pet store.

Still, what’s wrong with purchasing dogs or cats from a pet store. The American Kennel Club (AKC), spends lots of resources fighting bills just like the one proposed in Naperville to limit pet store sales. Yet, their excellent advice from their own website ironically offers some answers which contradicts their position.

“Visit the breeder’s home or kennel and ask to see at least one of the puppy’s parents. Get an idea of what the future holds for your dog in terms of temperament and appearance. Observe the premises. Is the house/kennel clean? Odor-free? Dogs and puppies should be clean, well fed, lively and friendly. Look for signs of malnutrition such as protruding rib cages or illness such as runny nose/eyes, coughing, lethargy and skin sores.”

Totally correct, it’s absolutely important to see where the pup was raised and to meet the parents. You can’t possibly do that when purchasing from a pet store.

“Find out about the health of your puppy and its parents. Breeders should be honest about the breed’s strengths and weaknesses and knowledgeable about the genetic diseases that can affect their breed – including what’s being done to avoid them. Breeders should be willing to share proof of health screenings such as OFA and CERF certificates with potential buyers.”

Some pet stores do offer proof of some health screening information which has proven to most often be unreliable. And most pet store employees have no clue exactly what the OFA (Orthopedic Foundation for Animals) or CERF (Eye Certification for Dogs) is all about. There’s no possible way to really determine previous family healthy history when purchasing via a pet store.

AKC adds this too: 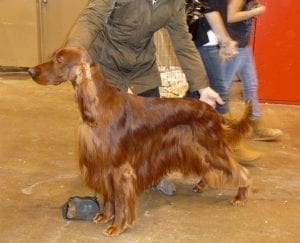 Responsible show dog breeders, for example, would NEVER consider selling to a pet store. They need to know what kinds of homes their dogs are going to

“A responsible breeder may ask you to sign a contract indicating that if specified conditions of care are not met or you become unable to keep the puppy, he/she will reclaim it. . . Breeders should be willing to answer any questions you have and should ask many of you as well. Breeders will want to make sure their puppies are going to good homes, with people who know what to expect and have made all the necessary preparations.”

Again, excellent advice and information from the AKC. Unfortunately, there’s totally no way any of this can happen when buying at a pet store. Of course, responsible breeders are discerning about who buys their puppies. Pet stores will indeed ask only one question: “Will that be cash or charge?” Their objective is to make a sale – and often the person making that sale is a 22-year old who may like dogs but is just trying to make a buck. There’s no effort to match the right dog to the right home.

And regarding reclaiming of that puppy. In some states, there are lemon laws which mandate that under certain conditions pet stores take back a dog. But that’s only under specified conditions, which include health issues. I’m unsure what happens to dogs who require much veterinary care when they are returned to pet stores. So do many consumers. So, there’s a hesitancy to return sick dogs. In the first place the lemon laws devalue dogs and cats; these aren’t washing machines or another appliance to be returned. They are living and breathing members of the family. In other states, there are no lemon laws, and pet stores won’t even consider accepting “returns.” When that happens, they animals land in shelters.

Again, a responsible breeder always wants take back an animal; the explanation for the return is irrelevant.

Veterinary Professionals Against Puppy Mills was formed because thousands of individual veterinary professionals expressed concerns regarding some of their professional organizations not being proactive. “I don’t understand how in a country of animal lovers, puppy mills can be tolerated,” says Dr. Scott Rovner. “Now, we’ve finally begun to speak up and do something about it; we need to.” 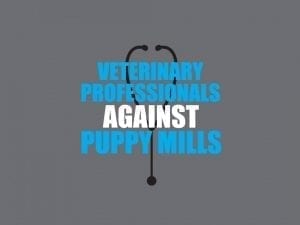 Dr. Jane Lohmar adds, “I know what I’ve seen in practice over the years, dogs sold from pet stores are far more likely to have a myriad of health and behavior problems. And behavior problems are a significant reason for dogs (or cats) landing at shelters. I’ve repeatedly seen the results of what happens to puppy mill dogs. One example was Lilly, a puppy mill breeding Dachshund who had dental disease so bad that a hole had formed from her palate through to her nose (an oral nasal fistula). Lilly also had a giant hernia, mammary cancer and heartworm disease. Luckily, we were able to help this dog,”

And the National Association of Veterinary Technicians in America (NAVTA), representing around 20,000 veterinary technicians and nurses supports – as does Veterinary Professionals Against Puppy Mills – bills  preventing sales of dogs and cats at pet stores. 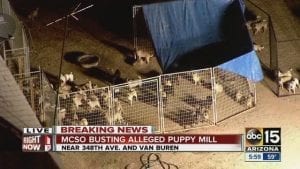 One argument against banning sales of pet store dogs and cats is that these animals were bred at Department of Agriculture Inspected facilities.

For starters, that’s often simply untrue. It’s a complicated and mysterious entanglement to discern truly where the dogs and cats sold at pet stores are from. To begin with, you know they’re not from responsible breeders as no responsible breeder ever sells to a pet store.

But pet stores maintain otherwise. Stores may say animals are from this person….True enough, but that person didn’t breed the dogs, and maybe not even the person before him. The truth is that there are second and third parties (brokers) involved all the time. So, really who knows where the trail began? Investigative reporters and others who are determined to do so have tracked down the real sources, but it takes some doing. In an excellent Chicago Tribune story from 2018, the headline correctly identified the process as “puppy laundering.”

The truth is that sometimes facilities that sell to pet stores might (or may not) have passed sate and/or Federal Department of Agriculture inspections. First, in most cases, it’s nearly impossible to know where the dogs are really from unless you work very hard to get past the second and third party brokers, as described.

And for pet stores offering real full disclosure – even then, under President Trump’s administration, even with the name of the facility where the dogs are reportedly bred, the USDA is no longer always transparent to offer results of most inspections online. 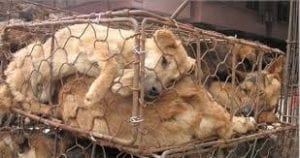 What is that Doggie in the Window? 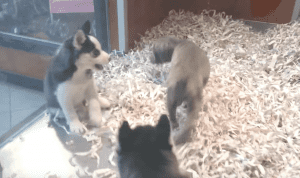 For many years veterinary professionals and dog trainers have wondered about that dog being sold as a Yorkiepoo being really a Yorkiepoo. Today, genetic testing has indeed over and over again shown that pet stores are not always being honest about breed identification. I admit, it may not be the pet store’s fault, if they’re told the dog is a pure bred Siberian Husky, that’s the sign they place on the cage. But the puppy miller may not have been so honest, or even knowledgeable. There’s probably some Husky in that dog somewhere, but it’s called fraud when you sell something different than what you say it is.

And back to the AKC, the “designer breeds” selling for thousands (in some cases) at some boutique pet stores are little Yorkiepoos and Multipoos, etc. And also the so-called “teacup” puppies – which are smaller than miniature dogs of whatever breed they represent. Cute, yes. But lots of medical problems are more likely to accompany these poor dogs. In any case, none of these “poos” or “doodles” or  “teacups” are bred dogs, so I’m unsure why the AKC spends so much money to defend them being sold.

Those Animal Nuts are Anti-Breeder

I am not anti-breeder, but I argue AKC and Pet Industry Joint Advisory Council are anti-breeder. These organizations are spending a ton of money to support these large scale breeding operations, and not the household breeders doing a responsible  job of breeding English Setters or Rottweilers or Maine Coon cats. I have no issue whatsoever if people prefer a pedigreed or pure bred dog or cat. In fact, there are some advantages of doing so . And for each breed in the dog or cat, there’s a pure bred rescue with animals desperately seeking a second chance. Of course, shelters and rescues always have animals available, and adopting a mutt or domestic short hair cat from a shelter or rescue can save a life.

For those hollering that the goal is to put pet stores out of business, that’s a ridiculous claim.  Dog Patch Pet & Feed on Ogden Avenue in Naperville only a few years ago sold dogs and cats, now they adopt dogs and cats in need of homes. And they’re still in business, after many years in Naperville, and by all accounts doing just fine….and this store is now doing the right thing. There are many other pet stores who have gone the same route.

End to All Puppy Mills? 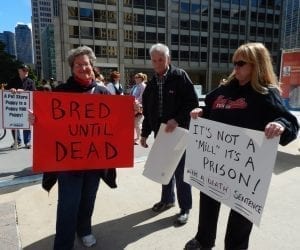 One argument is that banning sales of dogs and cats at pet stores only pushes more puppy mills selling online. Even if there was evidence of that happening, it doesn’t matter, Puppy mills already sell online. Sometimes you just need to do what you can do and ethically be on the right side of history. Hopefully there will one day be Federal restrictions on the ability of these horrible places to thrive online. And actually, the AKC has it right about meeting the breeder, meeting dogs’ parents, etc. None of which is possible online. I want so-called “hobby breeders” to thrive. I’m unsure the AKC does.

Naperville: You Can Do Better

I realize dollars are involved in all this (hence the push back in the first place)…but walking by that pet store, how do you explain the truth (much outlined in this story) about where the puppies and sometimes kittens are really sourced from to your children and to your conscience?

If you want to make a difference, please attend a meeting to show your support for the proposed ordinance to ban sales of dogs and cats in pet stores – or tell friends who live nearby. The meeting is January 21, Naperville Municipal Center, 400 S. Eagle Street in Naperville.