New Tool for Cats that Scratch 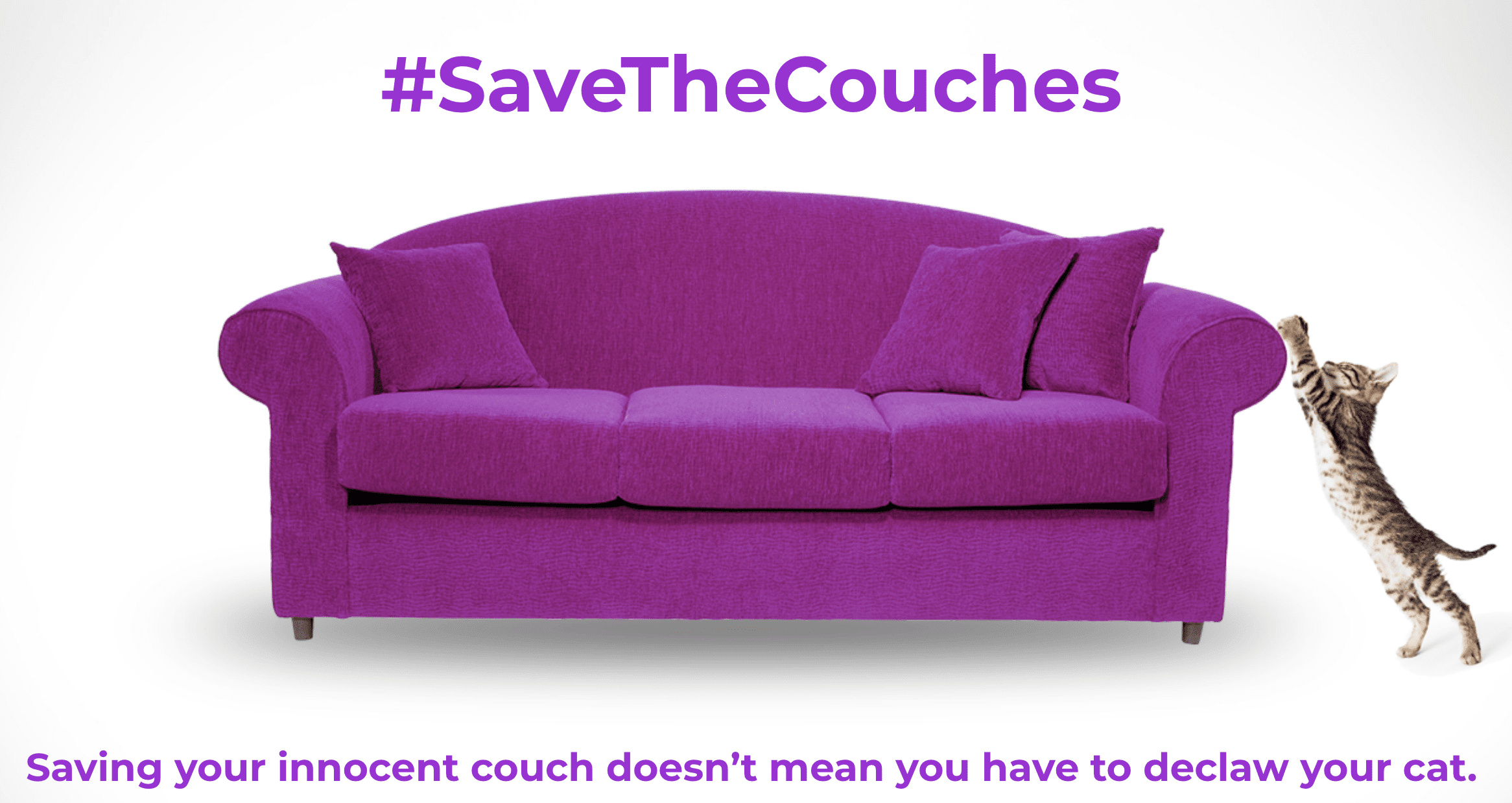 The tide is certainly shifting regarding declaw of cats.

After a lengthy political struggle (of which the primary opponent was local organized veterinary medicine), Denver just became the first city outside California to ban declaw in cats. In California, Los Angeles, San Francisco, Santa Monica, Hollywood, and others ban the procedure, which is also banned in many countries around the world. 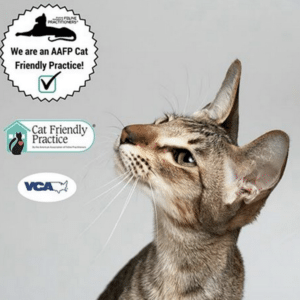 The American Association of Feline Practitioners (AAFP) recently updated their position statement on declaw, which begins,

“The American Association of Feline Practitioners (AAFP) strongly opposes declawing (onychectomy) as an elective procedure. It is the obligation of veterinarians to provide cat owners with alternatives to declawing.”

All this is happening simultaneously with the availability of a new tool for pet owners: an alternative to declaw called Feliscratch.

When cats scratch, which all cats are born with the need to do, they leave both an aromatic message (depositing pheromones) and a visual message, (seeing what’s been scratched). 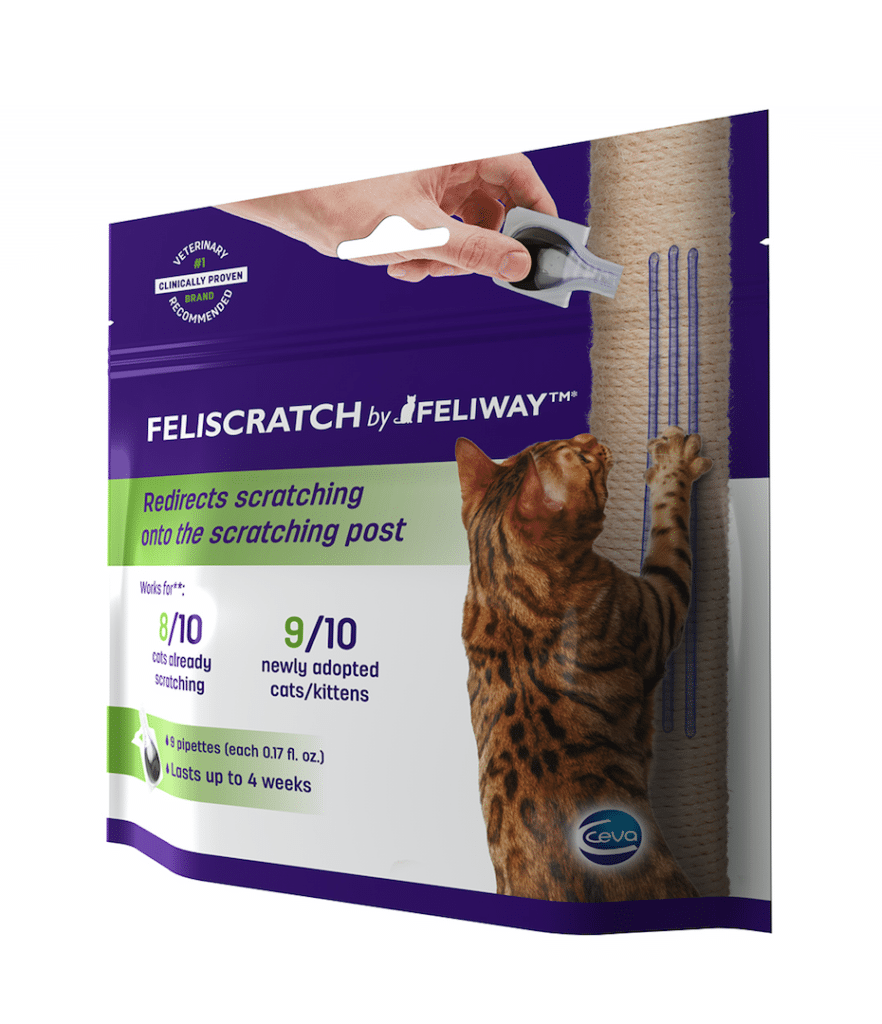 The ability to offer this aromatic and visual communication is important—if not downright necessary—for cats to feel secure in their environments.

Feliscratch is a blue liquid that is applied to a vertical scratching post. The liquid contains a synthetic copy of the natural pheromone cats deposit from their paws when they scratch as well as catnip to attract them to the post. The blue dye serves as a flag, a visual indicator that the post has been scratched.

Sounds great, but does the product really work? Absolutely. According to one study, the product works for eight of ten cats already scratching (where you don’t want them to), and nine of ten newly adopted cats or kittens.

In addition to using Feliscratch, increase your odds of success by: 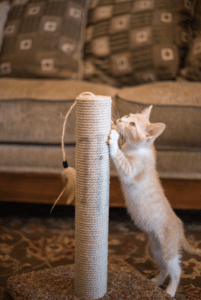 Choosing a scratching post that is sturdy and high enough to reach up for a good stretch in the first place.

Having the post wrapped with sisal. Individual choices on desired scratching materials vary, but sisal around the vertical post is most commonly preferred.

Positioning the new post (to be treated with Feliscratch) near where a cat may be currently inappropriately scratching, such as a sofa.

Rewarding with praise and/or treats. Just as you would when potty training a puppy, reward your cat for scratching where she’s supposed to.

Making the place where the cat is inappropriately scratching uncomfortable. If the cat is scratching at stereo speakers or the side of a chair, for example, double-sided tape or a manufactured product (which is like double-sided tape) called Sticky Paws will help to deter. Cats don’t like the sticky feeling on their paws. If it’s an entire sofa or large chair in question, drape car mats upside down (nubby side up) or plastic that an office chair slides on (also nubby side up) over the furniture. Cats won’t attempt to walk on this, it’s uncomfortable, and it’s impossible to scratch. However, offering a nearby scratching post and Feliscratch to attract the cat there is still key. Without a suitable alternative, the cat will just scratch somewhere else you won’t likely appreciate, such as a sofa in another room.

In a multi-cat home with inter-cat tension, simultaneously use Feliway Multi-Cat, and consider seeking a consultation from a veterinary behaviorist, veterinary technician certified in animal behavior, or certified cat behavior consultant.

The above techniques encourage cats to scratch where you want, and discourage the behavior you don’t want without resorting to hollering at or physically punishing the cat, both of which usually only work to fracture the human-animal bond.

Frustrated cat owners have previously chosen declaw, perhaps unaware that this is an amputation of the third phalanx. It’s not just a matter of clipping a cat’s nails. It’s not like clipping your finger nails. It is the cutting off of the last part of each digit.

From the AAFP, “There are inherent risks and complications with declawing that increase with age, such as acute pain, infection, nerve trauma, as well as long term complications like lameness, behavioral problems, and chronic neuropathic pain.”

I’m unsure how it became acceptable in the U.S. to electively amputate. Behavior modification was always, and continues to be, a suitable and more humane alternative. Feliscratch is an alternative that speeds up the process of attracting cats to scratching posts, and saves lives, since some cats that scratch in the wrong places are given up to shelters (or just booted outdoors), and likely even more declawed cats are given up to shelters as a result of behavior problems (and/or medical issues) following the declaw. So, save the couch and your cat.

Conversation with Dr. Theresa DePorter about declaw in cats.