No Kill Chicago: We Can't Get There This Way 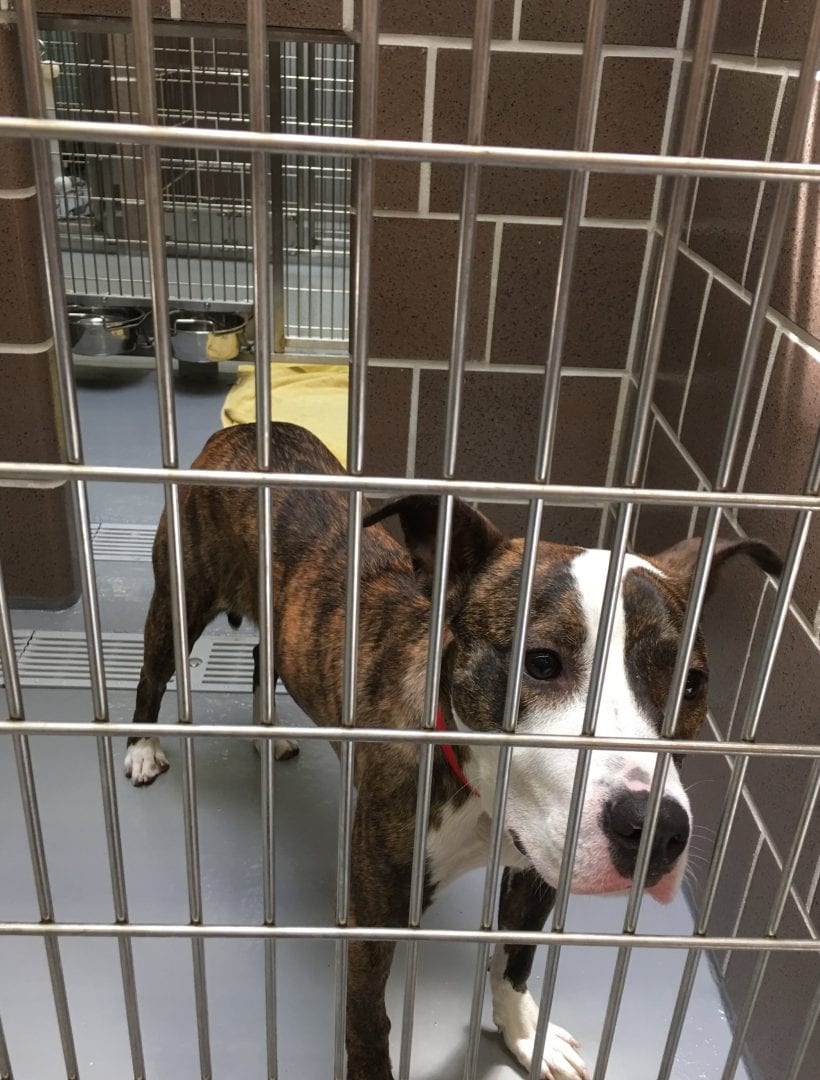 Alderman Ray Lopez (15th ward) has organized a protest at Chicago Animal Care and Control, (for November 30) seeking the ouster of director Susan Russell, and simultaneously leading a campaign for a No Kill City. He now has a proposed an ordinance which would support steps for Chicago to be No Kill.

The idea of fewer euthanized animals is very good, of course. However, just because a City ordinance mandates No Kill doesn’t make it so; community support is required. 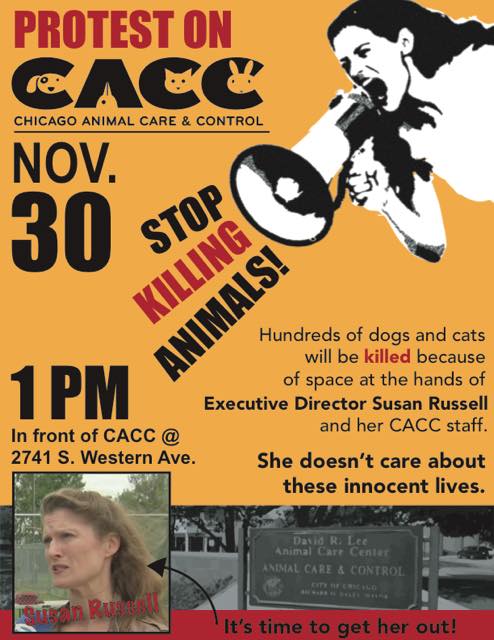 Curious call from the office of Alderman Lopez

In my view, the biggest issue of all are the 17,000 plus animals who arrive at the doorstep of Chicago Animal Care and Control (CACC) annually. Lowering THAT number is key. The proposed ordinance (which I have seen) doesn’t address that. How well thought out is it?

Given that Commissioner Russell has only been on the job since only this  past summer, the red tape created by the City itself, and a lack of resources (mostly financial), what does Lopez expect? Compared to many cities with larger budgets, Chicago euthanizes fewer animals. Still, of course, Chicago can do better.

Commissioner Russell is also dealing with dog flu (canine influenza virus), and  planned construction (which is going to happen and soon, according to the City).

Around the time Russell was hired, Ald. Lopez (with Alderman Ed Burke) crafted a No Kill Chicago resolution. Unfortunately, Ald. Lopez never consulted real professionals in animal welfare or the rescue or veterinary community. He just did it. The response was mixed at best, though all at that time the animal welfare and veterinary community appreciated his intent, and offered to help….myself included. 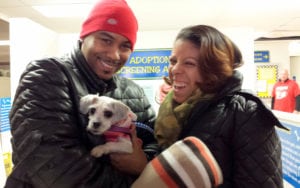 In Fact, Live outcomes, adoptions, fostering, etc. are up under Russell.

I offered to gather a wide-ranging group of leaders from Chicago area animal welfare, rescue and veterinary medicine to help direct the Alderman. Lopez took me up on the offer, and I created Work Group to meet under his auspices, The group gathered twice at City Hall. The Work Group included a Chicago who’s who in animal welfare, rescue and veterinary medicine. Lopez also met with the Chicago Area Shelter Alliance, a coalition of most shelters/rescues in Chicago.

From the very start, Lopez has been publicly critical of Russell, and her upper level staff.

Russell was actually chosen by a special task force – the first time EVER that this job wasn’t filled by a political appointee. I was among a group of vocal opponents to Mayor Emanuel filling the gig with yet another political appointee, and the Mayor listened  (now that he had the opportunity, since the previous CACC Commissioner was retiring). As far as I know Russell has no background in Chicago politics, and similarly the other top candidates for the job of directing CACC were all animal professionals.

At the end of the day, Mayor Rahm Emanuel approved Russell’s choice. She is an appointee of the Mayor.

I’ve known every Commissioner of the Department since an ex cop Peter Poholik held the job, dating back to the mid-1980-s, when Chicago still had a ‘city pound’ mentality. Along the way, until now, all Commissioners were politically appointed without any background at the facility, or animal welfare experience. That is with one exception –  that Commissioner (also a political appointee) was an absolute disaster, and while she sought No Kill, she stockpiled animals – which caused disease outbreaks, and more deaths resulted than ever. What’s more, rescues and other agencies didn’t want to “pull “from the city shelter because they couldn’t afford to treat sick animals, and didn’t want to deal with that Commissioner’s temperament. Mayor Richard M. Daley hired her, but finally, as a newspaper report was about to hit, when Emanuel got wind of the impending blow up story, he fired her. CACC’s history has been filled with many messy stories over the years. And animals have certainly paid a price in Chicago.

All the more reason why I and others wonder why Russell – who has made so many positive changes within the department – is a target.

But from the start, Lopez has inexplicably publicly attacked Russell and her staff.

No Kill is the vision driving Lopez. The notion sounds great.

When I first wrote about the prospect of Chicago being No Kill, and talked about it on the radio and was quoted in newspapers and appeared on TV – some citizens responded, “How about No Kill for people?” In fact, while no one I answered via email didn’t want to see fewer animals euthanized, they were,  however, offended by the terminology being used – now in 2016 – in this City, given the gun violence and killings.

What’s more, No Kill is about as divisive as terminology can get even within the world of animal welfare. And the truth is that the majority of those in the Lopez Work Group actually opposed the No Kill terminology.

I suggested compromise terminology, which Lopez indicated he liked, but has never been heard again.

I am not going through the entire ordinance in this space. However, so you understand my concerns, and why I (and others in the Work Group) wonder out loud….Here’s one example:  I have long spoken about the need for a staffer expert in animal behavior at CACC, who may train dogs and cats. For example, train for less barking in the shelter, and cats to come to the front of their cages. This training enhances enrichment and lowers stress and anxiety (and therefore susceptibility to disease), assuming the training is positive reinforcement. Training increases animals’ adoptability. Arguably most important, a behavior professional can assess, from a behavioral perspective, if an animal should be euthanized, while a veterinarian can collaborate.

In truth, and let’s be honest here, some aggressive dogs should be euthanized. It is dangerous to allow them back into the community. That is just the reality.

Apparently, the Alderman heard me regarding my call for a qualified behavior expert – as this has been a repeated personal refrain. However, the proposed No Kill ordinance mandates a certified applied animal behaviorist (CAAB) is employed by CACC. I’m unsure why only a CAAB?

That designation of CAAB is a PhD behaviorist, which there aren’t many of. While I do think a CAAB would be absolutely qualified, there’s only one I know in Chicago with that designation. Is Ald. Lopez promising this one person the job?  I assume not. Why not also open the position to a veterinary behaviorist (there are only two of those in the City, but a veterinary behaviorist – if you could get one to take the job – would be eminently qualified – and being a veterinarian arguably most qualified); or why not one of my colleagues which are greatest in number and therefore the most likely qualified option, a certified animal behavior consultant. Some CAAB’s are in academia, and some will only work with captive (zoo) animals or wildlife, and some are retired. So, why only a CAAB? I have no clue. Opening the pool to veterinary behaviorists and also certified animal behavior consultants makes FAR more practical sense – though I do appreciate and support the notion of an expert in animal behavior being on staff.

There’s a great deal in the proposed ordinance which is excellent, which I am grateful for and I believe will move Chicago forward.  There are bullet points in the ordinance that make little practical sense (such as finding a CAAB as described above); there are other points which leave out how how resources could be allocated to make it realistically happen (such as moving licensing of city dog tags from the City Clerk’s office to CACC).

What missing – and most glaring – is a plan on what do with those more than 17,000 animals who enter the system annually. I have always said that lowering that number is where the ‘secret sauce’ lies. There are many components to that – from accelerating already aggressive low cost spay/neuter and pet microchip options; to supporting ways to reunite lost pets with owners to offering safety nets (such as behavior advice) for people about to give up pets, so they don’t fracture that human/animal bond. In fact, behavior is the most common cause of death in pets – due to relinquishment. Cats that think outside the box too often may be given up – as one example. Behavior hotlines have proven successful in other communities, and right here in Chicago – the Anti Cruelty Society already has one. Pooling resources is important, and the only way to achieve No Kill.

For example, another solution is already occurring, a program referred to as CRISP (Chicago Rescue Intervention and Support Program), a new initiative pooling resources of eight local rescues to work in concert with CACC to provide assistance and support for pet owners in need, diverting owner surrendered animals to accredited rescues and shelters. It’s working!

However, there is no magic wand to wave with an ordinance. Cooperation and collaboration from the community – including pet owners – is required.  Just because No Kill it is wanted – even if for all the right reasons – doesn’t mean it will happen. In fact, without a thought through ordinance, there may be deleterious unintended consequences.

As just one example, one local private shelter once pulled kittens and cats from CACC. They made a decision to no longer do so (incidentally without informing their donor base), but one can argue they have the right to do (even if it’s not the right thing to do) – they are a private agency.

Because killing fewer animals sounds good – of course it does….Ald. Lopez had no problem getting many colleagues to sign on to his proposed ordinance. However, several Aldermen knew better and contacted me personally. I expressed some concerns, including those mentioned here, though, of course I applaud the intent.

However, I am confused – why work against the City animal control agency? Instead, to me, you work with others to solve issues to achieve a common goal.

Until now, I’ve remained quiet publicly, declining several media interviews. However, when I heard about the protest and outright effort to oust Russell, I had to speak up as I don’t see that as a benefit or a way to move the City forward, though the protest may garner press attention. I am unsure what Lopez is protesting or supporting picketing against to be honest.

I want to help, that’s always been my MO, and most everyone I know in animal welfare with a rescue or a shelter, or the veterinarians, not campaign for a cause just because.

For example, what any Chicagoan can do right now is to become a foster home for a dog or cat; it’s true anytime – but especially now as construction at CACC is about to begin. Should the construction happen now? I don’t know, but it is happening now. To learn more about fostering, contact Friends of Chicago Animal Care and Control.  Volunteers are needed too.

Commissioner Russell is not without plans to move forward, Aldermen could help her to accomplish that, offer input, adjust those plans, ultimately achieving what many might call No Kill. Cooperation isn’t only a good idea, it’s required to achieve what we all want to help Chicago to become a more humane city.