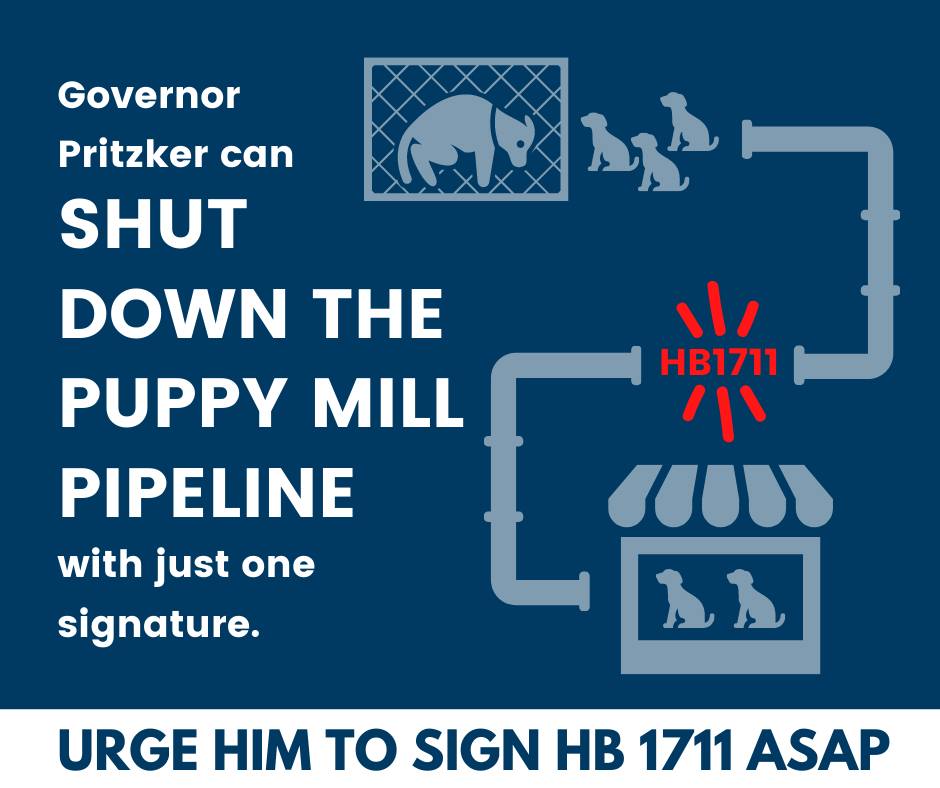 With one signature from Illinois Governor J.B. Pritzker, Illinois will become the fifth state to ban sales of dogs and cats at pet stores. This follows a  bipartisan, 38 to 12 on May 31, the Illinois Senate voted to support HB 1711  On April 15, the Illinois House of Representatives vote resoundingly,  76 to 24 in favor of the bill HB 1711. “It’s just awesome for a humane ordinance that reached across the aisle and brought people together from the entire state,” Illinois Rep. R-Andrew Chesney (89th District), who sponsored the House bill, told me at the time.

Why this bill? Simply put, it’s about stopping the puppy mill pipeline and also the large retail “warehouse” facilities. Neither is good, and obviously puppy mills are downright horrible.

Still, the pet store industry is lobbying hard, asking for people to write Gov. Pritzker, asking him to veto. Nevermind, many that are doing so are out of state. Here’s what Illinois Director of Humane Society of the United States Marc Ayers says in his Facebook post, “Petland, the biggest peddler of puppy mill puppies is phone banking IL residents and asking them to have Gov Pritzker veto HB 1711. Please keep calling his office and asking he support and sign HB 1711. We didn’t come this far to let puppy mills stay in business! (217) 782-0244.”

And the puppy mill supporters don’t only include many from the pet store industry. They include the American Kennel Club and astoundingly, the Illinois State Veterinary Medical Association. Truth is, they hardly represent most views of veterinarians or veterinary technicians, which is why Veterinary Professionals against Puppy Mills was created.

In April, Governor Jay Inslee of Washington State signed a Humane Pet Sales Bill, made Washington state the fourth in the nation to prohibit the sales of dogs and cats at pet stores, joining California, Maryland, Maine. That’s not to mention approximately 400 cities and many counties that have also stood up to puppy mills that supply these stores with their dogs and cats.

Chicago was an early adopter to ban sales of dogs, cats and rabbits at retail pet stores, but a loophole in the ordinance prevented enforcement and allowed the puppy mills and stores to defraud consumers for far too long. That loophole was finally closed in the Windy City in late April. Due to one obstinate alderman, it almost didn’t happen. No matter, Chicago – as it turns out – would have fallen under this state-wide ban.

In Illinois, currently 22 cities already ban retail stores sales of dogs and cats (and in some places rabbits also). Joliet, IL and their residents and advocates had been fighting hard to support a humane  ordinance, now they’ve got one – or at least once the Governor signs this into law. And six months later the law goes into effect.

Once the Governor signs, and Illinois becomes another state to ban, other states are already seriously considering similar pet store sales bans, including New York, New Jersey and others.