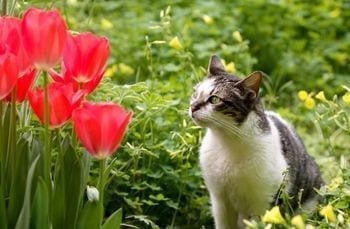 According to the Cornell Feline Health Center, parasitic infections can have a significant effect on feline health, and in some cases on that of their owners and other wild species.

A recent study analyzed 21 previously published studies to quantify the risk of cats becoming infected with 19 different feline parasites, including those with the potential to be transmitted to people, like Toxoplasma gondii (the cause of toxoplasmosis) and Toxocara cati (intestinal roundworms). This study found that cats that are allowed outside are 2.8 times as likely as those that are kept indoors to become infected with parasites, and that cats living at higher latitudes that are allowed outside are significantly more likely to become infected with parasites than cats with outdoor access that live at lower latitudes.

These results provide evidence that allowing cats outside significantly increases their risk of being infected by feline parasites (almost three-fold), and that this effect is augmented at higher latitudes. Cats can get and suffer from some tick disease, increasingly common is a deadly tick disease in cats called cytauxzoonosis (sometimes referred to a “bobcat fever”).

I am glad the brilliant folks at Cornell are making me look smart because for years I’ve been saying the following:

Of course, outdoor cats must deal with other issues, including but not limited to coyotes, battles with other cats and cars. What’s more, if your outdoor cat is using a neighbor’s garden as a litter box, you’re not being a responsible neighbor. And there are potential ethical issues if the cat is also preying on songbirds and/or other wildlife.

Feline parasites are far more likely to occur in cats that have access to outdoors. To be clear this matters a ton because some of those parasites can be transmitted to the environment to be spread elsewhere, or spread directly to people. And these parasites impact a cats’ health, and may even be deadly.