Most Thanksgiving Day visits to the pet ER can be avoided. For example, dumpster diving and counter surfing are dangerous sports for dogs – turkey bones can be a choking hazard. These bones can easily splinter once swallowed causing a potentially life-threatening emergency. However, dumpster diving can’t happen if the pet can’t get into the trash. 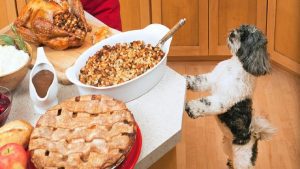 And the potential emergencies don’t stop with the trash. Fat or skin from turkey or ham – even a surprisingly small amount of it in some dogs – can cause pancreatitis, which may necessitate a visit to the animal ER. Full recovery from inflammation of the pancreas can take many days or even weeks. And on rare but all too real occasions pancreatitis can be deadly.

Beyond the main course, an artificial sweetener called Xylitol used in many sugar-free baking mixes is really bad news for dogs Even small amounts of xylitol can cause 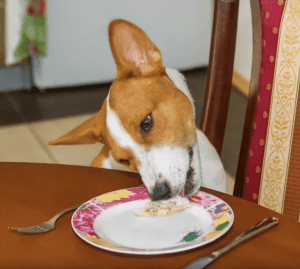 If you’re a lousy cook – consider moving your pet bird far away from the kitchen. Birds can suffer what is commonly called Teflon toxicity. Non-stick heating surfaces heated at too high a temperature (often above 530ºF) results in caustic fumes – which may not concern our senses, but can cause serious respiratory distress in pet birds, which can result in death.

Invasion of the Relatives 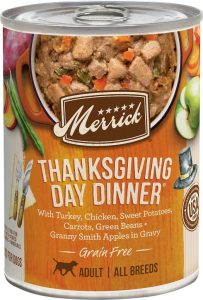 In reality, for most pets, a single SMALL slice of turkey (without the skin), is not likely to cause harm. The problem is we sometimes forget that several slices of turkey to a 12 lb cat or 30 lb dog is pretty the equivalent to a person eating half a bird.

Well-meaning relatives may express fondness for your pets by offering food from the table. If only Uncle Buddy offers a small slice, that’s one thing, but soon Aunt Sally gets into the act, and your friends Rob and Laura do the same. Before you know it, the pets have had way too much and have also been encouraged to beg from the able.

Closed doors are a safe place to sequester the pets, places such as a den or second bedroom. Thanks to Merrick Pet Foods, your dog can have a Thanksgiving dinner specifically meant for dogs, and appropriately called Thanksgiving Day Dinner; another is called Turducken. Offer a sampling of Thanksgiving Day Dinner stuffed inside Kong toys or other toys, and the pup will keep busy getting at the food while on the other side of the door the entire family carves into the real bird.