Profound is probably the right word for his influence. It can be argued that no one who wrote about pets had the impact of Mordecai Siegal, 75, who passed away on    April 1. Siegal authored 33 books and in the process changed the face of pet writing.

Siegal, who was born in Philadelphia, was an off-Broadway actor, toiling in mostly forgettable work. Although he did have one shining Broadway moment in the “Thrreepenny Opera” alongside Bea Arthur and Ed Asner.

Clear he wasn’t about to win a Tony Award, much less find regular work as a working actor, ask Siegal then and he would have said that his goal was to write the next great American novel.

Meanwhile, in 1970, he and his twife Vicki had a blessed event. Their “baby” was Pete, a Siberian Husky who liked to chew.” Siegal met a young dog trainer named Matthew Margolis on the street. He hired him on the spot to deal with the chewing. Margolis looked around Siegal’s apartment brimming with books, and asked, “What is it that do you do?”

Siegal explained he was an author. Of course, he wasn’t a published author, but that was only a minor detail. Margolis naively suggested the two team up for a book about dog training. Siegal thought the idea was hysterical; after all he wasn’t a dog writer.  Months later, with that great American novel still not published, Margolis recalled getting a call out of the blue, “Remember that book idea you had?” growled Siegal on the other end of the phone. 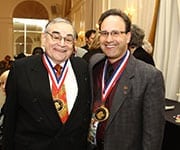 Knowing that having the late Roger Caras’ good name on any book’s jacket about pets might help sales, Siegal had thought about reaching out to the legendary pet writer and ABC-TV reporter to write a blurb promoting their first effort “Good Dog, Bad Dog.” Coincidentally one early morning the Siegals were riding in their Volkswagen in East Hampton NY and noticed a mailbox with the name Roger Caras. Could it be him?

Siegal told me this story several times, explaining how Caras came to the door in his Terry cloth bath robe, inviting them inside for coffee. Caras, did lend his name to that book jacket and many others for Siegal; they became lifelong friends.

Caras, then president of the American Society for the Prevention of Cruelty to Animals, once said, “He’s impacted the pet industry like no other writer has. Before Mordecai came along, dog training was typically an excuse for animal abuse.”

When asked how he can possibly thank him, Caras simply said “pass it on.” Siegal did just that through his entire career – supporting others who write about pets, especially later in his career with his involvement in the Dog Writer’s Association of America..

Margolis went on to host the series “Woof! It’s a Dog’s Life” on PBS, made countless TV appearances and ran a hugely successful dog training facility. He says, “I owe my career to Mordecai. He was able to communicate in ways I don’t have the talent to do. As a result, so many dogs have been helped.”

“Good Dog, Bad Dog” was released in 1973. To ensure the book did well, Margolis recalled, “When we saw ‘Good Dog Bad Dog’ at the (now defunct) Doubleday Bookstore we were so thrilled to have a book in print. Mordecai just loved books anyway. But what we really wanted was the book to sell. So we both called the bookstore several times – using different voices – saying, ‘This ‘Good Dog Bad Dog’ is so amazing, it should be in the window. Finally, the last call I made, the bookstore employee pretty much answered the phone saying, “So what do you have to say about ‘Good Dog, Bad Dog?’ The next day, the book was in the window.”

Few, if any dog training books, had ever enjoy such robust sales, convincing book stores that dogs and cats ought to have their own sections at the stores, instead of being intermingled with wild animals. Amazingly, “Good Dog, Bad Dog” is still in print, and in about a dozen languages.

Siegal, the guy who once couldn’t get published, received more offers than he could accept. “I know this sounds crazy, but at first I resisted,” he once told me. “I loved pets. But this wasn’t what my plan was. I really wanted to write that great American novel.”

Since you can’t raise a family based on plans, Siegal eventually went with the tide. Soon the books began to flow, like no other pet author ever. Titles have included “When Good Dogs Do Bad Things (with Margolis),” “I Just Got A Puppy. What Do I Do? (with Margolis)” “Woof! (with Margolis),” “UC Davis Books of Dogs,” “The Cornell Book of Cats,” and “Simon and Schuster’s Guide to Cats.” He’s also written for seemingly every magazine there is, including Harper’s Bazaar, Redbook and Reader’s Digest to name a few, not to mention nearly every dog and cat magazine.

Siegal was President of the Dog Writer’s Association of America (DWAA) from 1994 to 2000. Among his many honors, colleagues gave him those that mattered most; he was twice presented with the DWAA Distinguished Service Award (1987 and 2000) and he was inducted into the Dog Writer’s Hall of Fame in 2007.

“I was thrilled we could announce his induction into the Hall of Fame at Westminster,” says David Frei, longtime voice of the Westminster Kennel Club Show. “Mordecai was the best ever at communicating to the public about training and care of all pets.” Westminster is only over a few days and happens only once a year – but the press room at the elite dog show was a second home for Siegal.

Frei said he watched Seigal do a reading from his last book, “Dog Spelled Backwards” at a local bookstore. “He was in his element, soaking up the crowd. He gave each character his own voice, and he acted it all out. He was ebullient.”

One story Siegal authored in “Dog Spelled Backwards” – which is a collection of writings about dogs – is a salute to his own childhood dog, Tarzan. “I was an introverted kid, and I really mean troubled,” Siegal once explained in an interview. “This puppy wouldn’t have it.  He instantly became my best friend, and I believe he changed my life. I don’t know what would have happened without Tarzan. In a sense, he saved my life.”

While he never did write the great American novel, his writing was no less great and no less important.

Siegal is survived by three children.