For 30 years, it’s been illegal to own a pit bull in Denver, CO. But that breed ban will now change if Mayor Michael Hancock approves. The Denver City Council passed a new code in a 7-4 marathon vote allowing owners to register their (presumed) pit bull with the Denver Animal Protection (DAP) and get a breed-restricted license. Owners will need to provide a name and address for the dog, proof of microchipping, vaccination, spay/neuter, and two emergency contacts. An annual fee will also be required to maintain the license.

The new law will take effect in 90 days if approved by Mayor Hancock.

In 2014, I co-authored a position statement on breed specific legislation (with veterinary behaviorist Dr. Sagi Denenberg) and how effective breed bans might be or might not be for the American Veterinary Society of Animal Behavior. In this paper, we cite that no city we could find with a breed ban (including Denver) actually has benefited by such legislation. Breed specific bans are supposed to make cities safer regarding dog bites, particularly severe attacks – and that doesn’t happen. We describe in this paper why severe dog attacks occur in the first place, and it’s not because of a specific presumed breed. The Centers for Disease Control, American Veterinary Medical Association and many other organizations agree.

Do You Even Understand What You’re Banning?

Also, I write “presumed pit bulls” because today we KNOW via genetic testing that overwhelming the majority of dogs referred to as pit bulls share the same phenotype (or look) but not the same genotype. In other words, they may share certain physical feature – which some unfortunately profile – but they are simply mixed breed dogs with widely varying genetics.

Additional conditions of the new Denver law (if signed by the Mayor) include notifying DAP if a dog escapes, bites someone, or dies. It also limits the number of (so-called) pit bulls in one home to two. If no violations of the code occur within three years, owners of registered dogs can remove the requirement for a breed-restricted license and license the dog under the same requirements as other dogs in Denver.

The previous law, enacted in 1989, banned the breed from the city of Denver. Dogs referred as pit bulls unfortunately remain banned in several towns neighboring Denver, like Aurora, CO,

In November, the City Council of Sioux City, Iowa, agreed to end its 11-year ban on pit bulls and pit bull mixes. At one point, hundreds of cities had similar breed bans, including the entire state of Ohio. Several years ago, Ohio repealed their ban, and many other cities have done the same. We know how to minimize dog bites, especially severe bites, and the answer has nothing to do with breed or in this instance what turn out to be an assortment of mixes which is what overwhelming majority of dogs presumed to be pit bulls are.

I’m pleased because dog lives will be saved and science is prevailing over pit bull myth.

So, if all dogs are treated fairly why do some states charge more money for homeowner’s insurance if you have a dog presumed to be a pit bull, or a variety of other breeds? Illinois is attempting to end this unfair breed ban insurance practice; if you live in the Land of Lincoln, please contact your state senator or state representative. 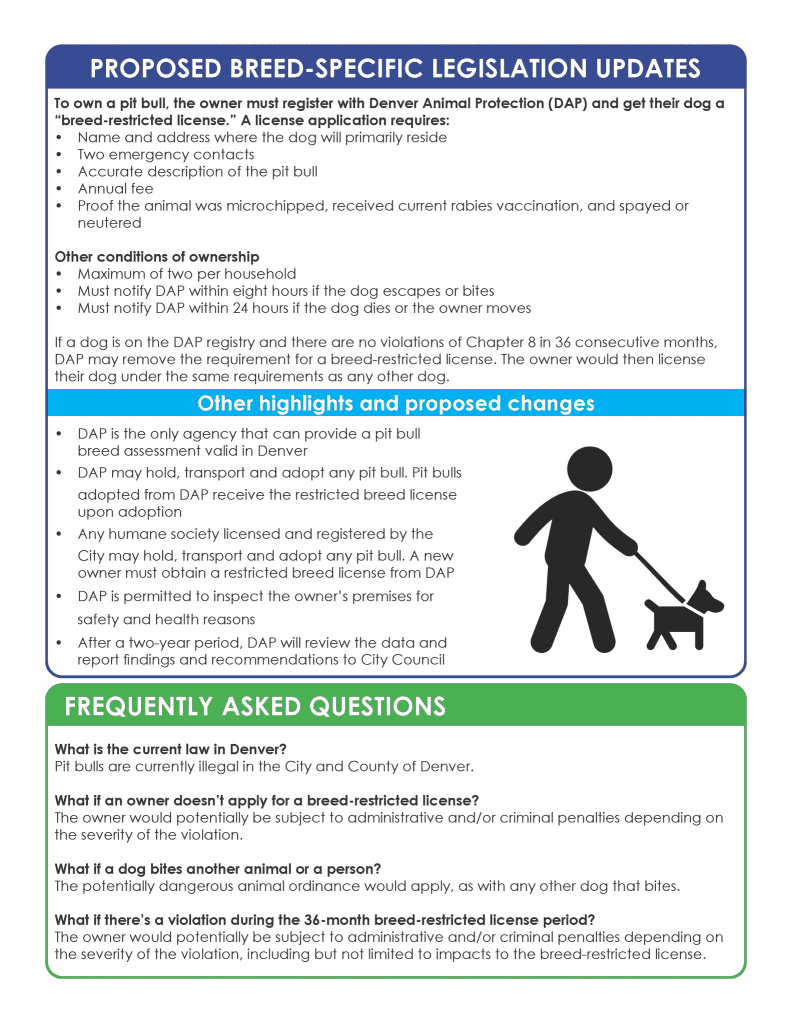