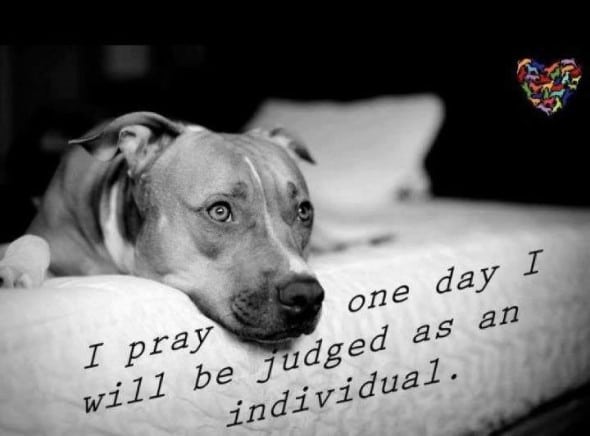 “Are Pit Bulls Man’s Best Friend Or Deadly Weapons?” is the name of an opinion piece in the Chicago Sun Times. My quandary: Do I write about this story, and give it more attention, or counter?

In this case, I choose to counter.

The author, Gene Lyons, writes about his two dogs: a Great Pyrenees and a Great Pyrenees/Anatolian shepherd cross who were both attacked by a dog the author calls a pit bull. No question he sets the story up well, it’s nicely written, and he explains that his dogs practiced their moves on the pit bull from the time when they played as young dogs.

Spoiler alert: From what I can tell, Lyons’ large dogs were pretty much unharmed, unlike the dog he calls a pit bull.

Here are my issues with what I can only believe is a true account: Why did the Sun Times publish this opinion piece? Sadly, dogs sometimes attack other dogs. Those stories, however, rarely see the light of day. If it were a golden retriever going after Lyons’ Pyrenees and Pyrenees mix, I suggest the story would never have been published in the first place. But a dog called a pit bull getting pay back for attacking two much larger dogs (and with children nearby)…now that is a story.

The dog labeled a pit was running toward his dogs with intent was without a leash. The problem here is not the presumed breed, but the fact that the dog is off leash. It’s a law for dogs to be leashed (except is specified areas, such as dog parks). And the dog’s owner was not in sight. How can that not be a problem? Presumed breed has nothing to do with this.

I keep saying “presumed breed” or “dog labeled as a pit bull” because the dog was unlikely a purebred American pit bull terrier. Many studies—based on genetic testing—suggest dogs with broad shoulders, a large head, and a big smile that we call pit bulls are nearly always mixed breed dogs.

Call them what you want, but there is little genetic similarly between any 10 dogs or 20 dogs you point to and say, “There’s a pit bull.” That’s not the case even with Lyons’ Pyrenees mix, because Lyons apparently knows one of his Pyrenees was mixed with an ancient independent thinking guard dog called an Anatolian shepherd. At least there’s some predictability of temperament. These dogs called pit bulls, according to science (if you believe in that sort of thing), are each individuals with mixed with various other breeds. So, the fact that these dogs called pits have a certain phenotype or look or profile, doesn’t suggest anything. And, in fact, the Sun Times story only encourages canine profiling, and without any basis.

The author of the story says, “I have never harbored a pit bull. Nor would I. Just as beagles are obsessed with tracking rabbits, pit bulls are preoccupied with fighting. It’s in their genes. They aren’t so much protective as simply belligerent.”

While this an opinion piece, and the author has the right to his opinion, this statement is not based in any fact. Oh, and by the way, while Anatolian shepherds aren’t common and therefore aren’t typically on the radar, there are places where your dog, because it has Anatolian in it, would be banned. How would you feel about that, Mr. Lyons? And there are even places where the Great Pyrenees is banned.

And, regarding the statements about pit bulls being involved in so many fatal dogs attacks, and never a beagle or basset hound. Actually, a variety of other breeds, including a tiny Yorkshire terrier (once killing an infant), have been implicated in fatal dog attacks.

According to a study from the Centers for Disease control,  American Veterinary Medical Association, and the Humane Society of the United States, breed has little to nothing to do with serious dog attacks. Here’s why those serious attacks occur:

Fix the above bullet points and serious dog bite numbers and human fatalities from dog bites will decline substantially. It has nothing to do with breed or presumed breed or mix.