Pucks and Paws and Decoding Your Cat

Pucks and Paws is a celebration of the Rockford Ice Hogs and pet adoption. How can I not love that? Listen HERE to my Steve Dale’s Pet World radio show with Mike Peck, business operations manager of the Ice Hogs. 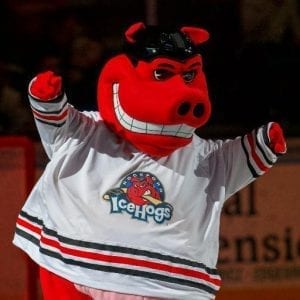 How I got into trouble with Hammy

Rockford, as a Blackhawks minor league team, has provided nearly 100 players for the major league Chicago roster. But no dogs – so far.

Pucks and Paws is the Rockford version of Dog Days, which I actually began with the Chicago White Sox. This year, they’re giving away some dog collars. And there’s a weiner dog race.  And you can watch it all with your best friend with four legs (social dogs, please). Sunday, March 29 is the next Pucks and Paws. Many Wednesdays, fans can also bring their dogs. And the $2 admission for dogs supports Rockford animal shelters and pet adoption. A silent auction also benefits the shelters.

I talked about what I said to Hammy E. Hog, the Rockford Ice Hogs mascot. Word got around about this.

I offer the story of how Miss P the Beagle that won Westminster in 2015 was once invited to a Blackhawks game by the Wirtz family, as they are Beagle fans – and the pup really followed the puck.

Emailed Question: Older Dog Having Accidents on the Bed

I answer a question about a 14-year old Cocker Spaniel who is having accidents on the bed. And I explain the signs of canine cognitive dysfunction syndrome or doggy Alzheimer’s. 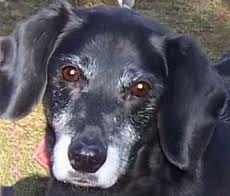 Your veterinarian can do something to slow down the progression of cognitive decline, but first it has to be identified. Look for two or more of these signs: 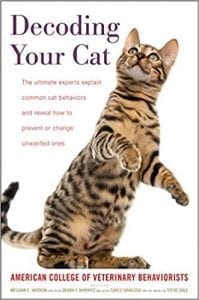 Decoding Your Cat is Now Available to Pre-Order

Decoding Your Cat is now available to pre-order on Amazon, authored by members of the American College of Veterinary Behaviorists. I am honored to have authored the introduction to this book, as I did Decoding Your Dog.

Here’s a round-up of the books I’ve authored or contributed to.