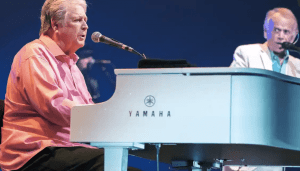 Brian Wilson and Al Jardine, standing up for what’s right!

Beach Boys founding members Brian Wilson and Al Jardine alerted fans that they have nothing whatsoever to do with an appearance by a version of the Beach Boys fronted by cofounder Mike Love, appearing at a trophy-hunting convention of the Safari Club International where Donald Trump Jr. will be the keynote speaker February 5 to 8 in Reno, N V

Love’s touring edition of the Beach Boys, holds the legal rights to the name, also includes longtime band member Bruce Johnston. They are slated to play Wednesday, Feb. 5 at the convention where hunting enthusiasts can arrange trips to hunt exotic animals. Trump Jr. and his brother, Eric, are longtime trophy-hunting supporters. 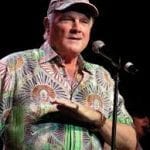 “This organization supports trophy hunting, which both Al and I are emphatically opposed to,” Wilson tweeted on Monday. “There’s nothing we can do personally to stop the show, so please join us in signing the petition” protesting the private event at Change.org.”

The petition, just launched, has over 90,000 signatures (as of this posting).

Oddly, Trump Jr. calls himself a conservationist. Graphic images of the Trump children celebrating their kills are readily available on this YouTube link and elsewhere on the internet.

If you don’t know, this truly is the Trump children holding a, can you believe, a leopard. Why would anyone take joy from this? Besides, leopard, depending on the species are threatened or endangered. But if you have enough money – it can be “legal.” 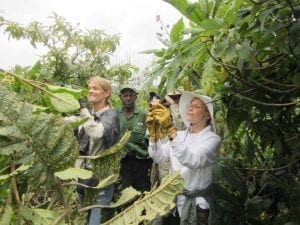 In my view, this is the best way to shoot wildlife, and ecotourism – done right, can help to save wildlife.

A Safari Club press release says, “Anti-hunting activists claim that the hunting industry’s ‘conservation claim is shattered’ by promotion of big game hunts at the annual convention, but overwhelming evidence from multiple independent scientific entities such as the International Union for Conservation of Nature (IUCN) proves this quote to be the opposite of reality. The IUCN has repeatedly published articles that prove illegal poaching and habitat loss are the largest threats to wildlife and that so-called trophy hunting provides direct benefits for the species hunted.”

This statement carries some truth as there is complexity of protecting nature when land is limited and the supposition that big game hunting is required when there is limited space for animals. However, this statement is about defense of killing rather than to find ways to solve the problems of diminishing habitats and illegal poaching. Some nations provide corridors for wildlife to travel to get to water, food and follow natural migrations. And also, an effort can be made to merely protect more habitat and additional resources to fight poaching.

Simply put, a real conservationist wants animals to live and not die. 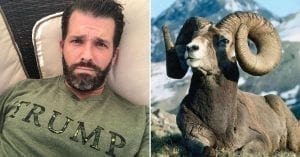 Last year, Trump Jr. got special dispensation from the Mongolian government and reportedly killed an endangered argali sheep in the country.  Again, I ask “why?” I seriously don’t comprehend the need. If he wants to prove his “manhood,” why didn’t he enlist in the military?

Shame on Love and Johnston – obviously for them, it’s about the gig and the money.

The petition, in part, says:

“Wouldn’t it be nice if all the Beach Boys, Stayed away from those who kill for fun?”

“On Wednesday 5th February, the Beach Boys are headlining at the Safari Club International Convention in Reno, Nevada, at which Donald Trump Jr is the keynote speaker.

We the undersigned pledge to stop buying or downloading all Beach Boys music, going to Beach Boys concerts, and purchasing any Beach Boys merchandise until the Beach Boys withdraw from the SCI Convention and publicly state their opposition to this sick ‘sport’ of killing animals for ‘fun’.”

Mike Love’s canned response, “We look forward to a night of great music in Reno, and, as always, support freedom of thought and expression as a fundamental tenet of our rights as Americans,”

I think the Wilson and Jardine, real Beach Boys, petition says it all – and say it very well. Dedicated to killing – so sad.