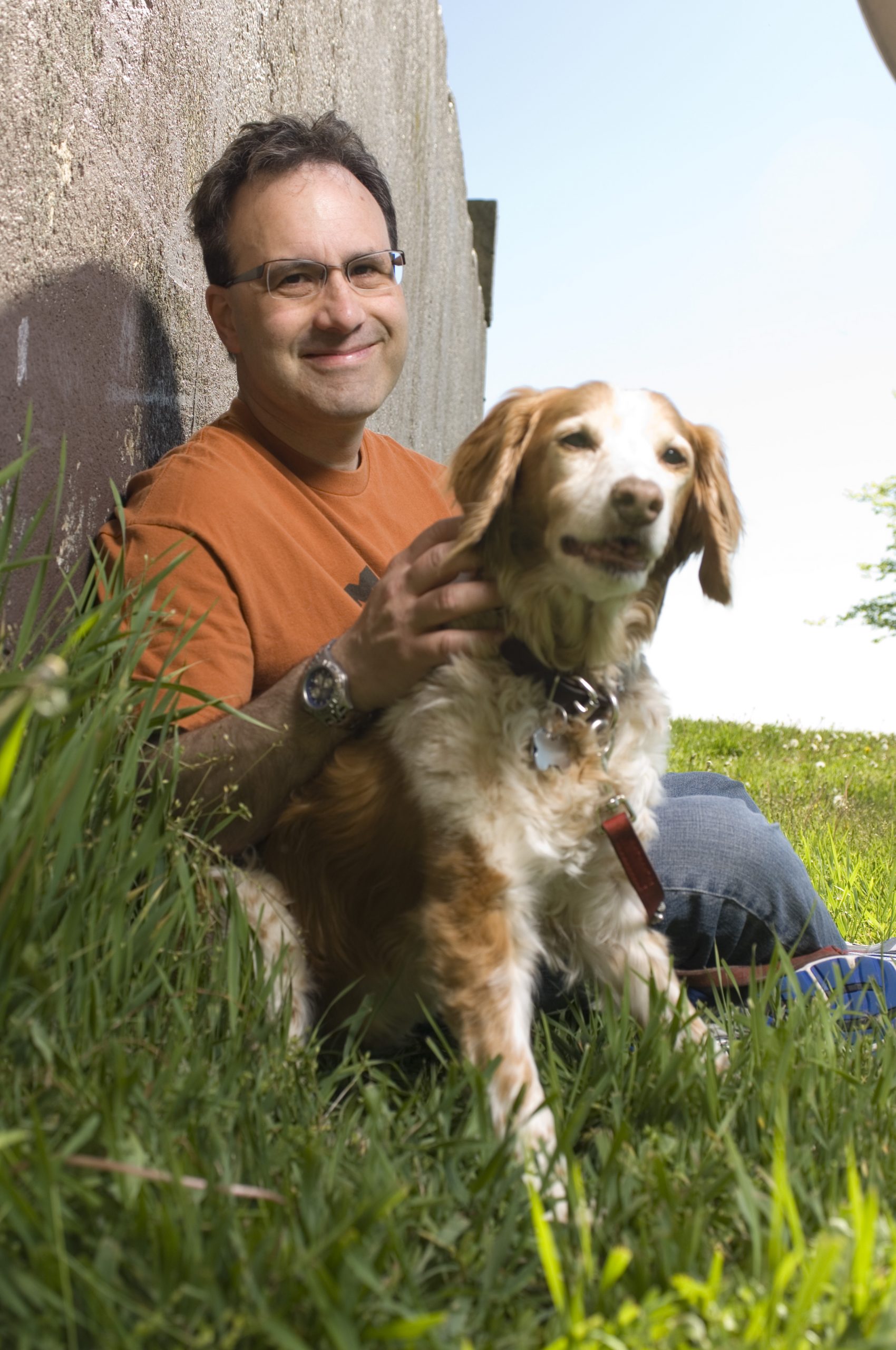 On National Pet Day (April 11), I recall our Brittany, Chaser, 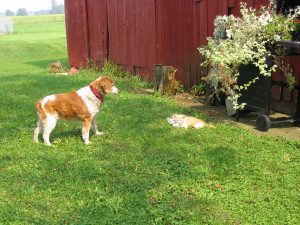 When Chaser entered our lives, she was around nine months old, and afraid of everything from canine and human strangers to busses and trucks, even fire hydrants. Whenever we left the house, Chaser would piddle. In fact, whenever I closed the bathroom door to do my business, Chaser would do her business on the other side of the door.

Advice helped, and somehow, we worked through it well before a whole lot was known about separation anxiety.  And our bond intensified.

I was writing newspaper and magazine stories about pets back then, but I was also covering the entertainment beat for various publications.

My wife and I took an amazing trip to the Galapagos Islands. When we returned, Kim Okabe, then an editor at Tribune Media Services (TMS) was voicemail number 31. Yes, back then we did have answering machines. Her message was an offer to be a syndicated pet columnist.

I didn’t accept immediately. I asked for a few days to think it over. 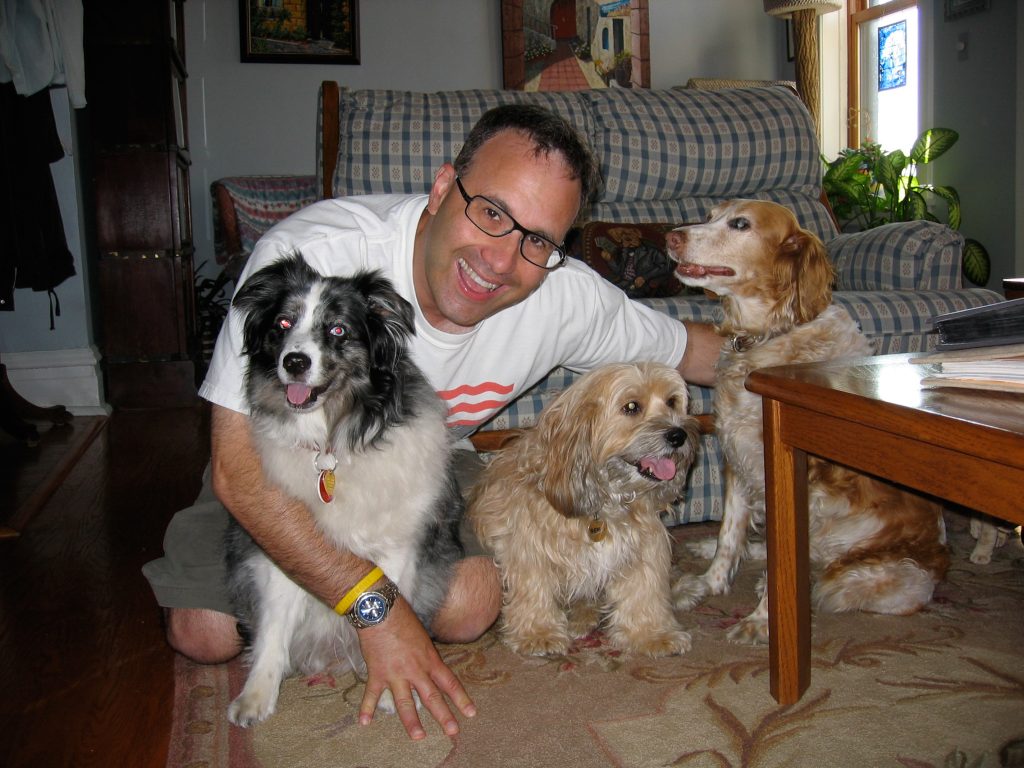 On the next day, I was riding our antiquated elevator in our Century plus old building on Chicago’s near north side.

“Ka-boom,” the elevator, which I believe is operated by a pair of chipmunks, suddenly stopped. The passengers began to pace and whine. It immediately occurred to me, ‘lucky thing I’m going up and not down.’

You see, the passengers were three dogs. Our then puppy Lucy; our neighbor’s dog, Boots Montgomery; and Chaser. Lucy was worried and howled with anxiety, and Boots was pacing and whining. But Chaser was calm as can be.

While waiting to be rescued from the elevator, there isn’t much you can do. So, I sat down and I thought.

I thought about just how far once terrified and anxious Chaser had come. By now, she had earned her Canine Good Citizen Test, was visiting my grandmother and any resident who wanted to say “hi’ at an assisted living facility, and cavorted happily with fellow canines at the dog beach – where she relished finding dead fish to roll in.

Chaser had a Pygmalion transformation into my fair canine. She was now every bit a confident dog.

As I thought about all this in the stopped elevator, Lucy and Boots began to quiet down. Chaser placed herself nearly on me. This entire time she stared into my eyes; our noses were nearly close enough to touch. This was her thing, staring at me.

The next moment seemed to last for several minutes. It was a moment that I’ll never forget. It was the kind of moment that I always thought was reserved for Timmy and Lassie.

Chaser and I connected in a way that is difficult to articulate. But I know that I felt her soul in a way that I never had before. I can’t translate what Chaser told me. It was more like a feeling, a warm feeling of unadulterated love. I was moved to tears, though I didn’t quite know why. Chaser ended this moment as she licked a tear, and then she smiled, opening her mouth and pulling back her lips as many dogs are able to do. She followed with a restrained “Woof.”  I can’t claim to translate the woof.

I knew then, at that moment, I wanted to help others to enjoy the relationship I had with Chaser.  The next morning, I phoned TMS and said “Yes!” about the offer to write the column.

Chaser Changed Lives Well Beyond My Own – But Sadly How Can She Know?

All these years later, I know I’ve reached millions of pet parents via that column which had an over 20-year run, my various pet radio shows, contributing to and authoring many books, and enjoying the honor to speak at many veterinary meetings and shelter fundraisers around the world. I’ve tried to make a difference using my platforms to advocate for animal welfare.

One dog can change a life. 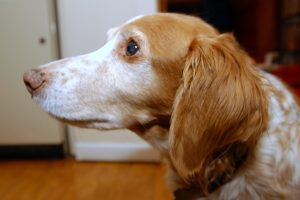 I know Chaser did have an amazing life; going through it all with me. She’s in the major league baseball record books; you see I’m the only person in baseball history to throw out a ceremonial first pitch with two dogs at my side (Lucy was there too). Chaser’s been a passenger many times on the Canine Cruise (an idea I thought of on my WGN radio show, an architecture cruise for dogs, offered by Chicago Skyline Cruiseline). Chaser was twice a Grand Marshall at the La Grange, IL Pet Parade, the largest and oldest pet parade in the nation. Chaser’s was at my side, helping to raise money at dozens of benefits for animal shelters, and so much more.

As we said goodbye, I’m sure she knew we loved her – but how could she know how she changed my life and influenced countless of others.

Of course, I recall all our pets on National Pet Day, celebrating those no longer with us and those we continue to be lucky enough to share our lives.