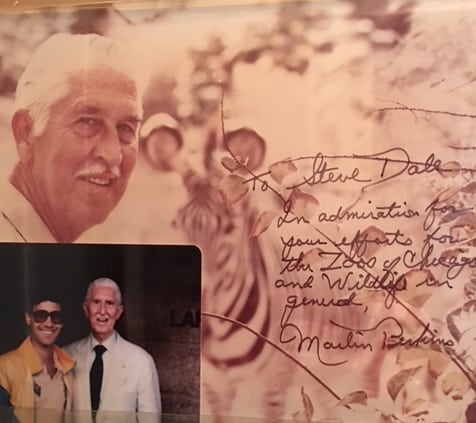 As a kid my dad and I used to watch Marlin Perkins on Mutual of Omaha’s Wild Kingdom. The joke – and it was a national joke that even Johnny Carson had fun with – was Jim Fowler was seemingly always in danger, wrestling a crocodile and running from African elephants while Marlin was ensconced in an air conditioned studio saying, “And those crocodiles, they can be and handful as Jim finds out as he nearly drowns. Now a word from Mutual of Omaha.”

Perkins, who was a director of the the Lincoln Park in Zoo in Chicago and the St. Louis Zoo, was a pioneer of wildlife TV programming at the time. There was no National Geographic Channel or Animal Planet, though there were beautifully shot National Geographic specials that aired periodically. I am grateful I was able to eventually tell Marlin Perkins the influence that he had on my career choice. I am thrilled Mutual of Omaha’s Wild Kingdom is coming back. The press release is below:

Mutual of Omaha’s Wild Kingdom web series is back with all-new videos featuring Wild Guide Stephanie Arne presenting an up-close and personal look at some of the world’s most fascinating creatures and habitats.

The most current Wild Kingdom web series is now online with a look at the polar bears of Churchill, Manitoba. This tiny outpost on the western shore of Hudson Bay is known for its brutal temperatures, which can plummet to 30 below Fahrenheit. But it also has another distinction, one shared by no other place on earth: It’s the polar bear capital of the world.

Join Arne as she ventures onto Canada’s frozen tundra to find the Polar Bears of Churchill. The webisodes can be viewed at www.WildKingdom.com or on the Wild Kingdom YouTube channel HERE.

Earlier this season, new webisodes were released that featured The Wild Animal Sanctuary in Colorado and the saltwater crocodiles of Mexico’s Banco Chinchorro. These webisodes can also be viewed through the Wild Kingdom YouTube channel.

In early August, Wild Kingdom will close out the season with webisodes on California’s Kelp Forest.

Mutual of Omaha’s Wild Kingdom premiered on network television on Jan. 6, 1963. It pioneered the format of wildlife TV and remains one of the most loved and respected wildlife programs in TV history.