Ricky the Cat Changed My Life 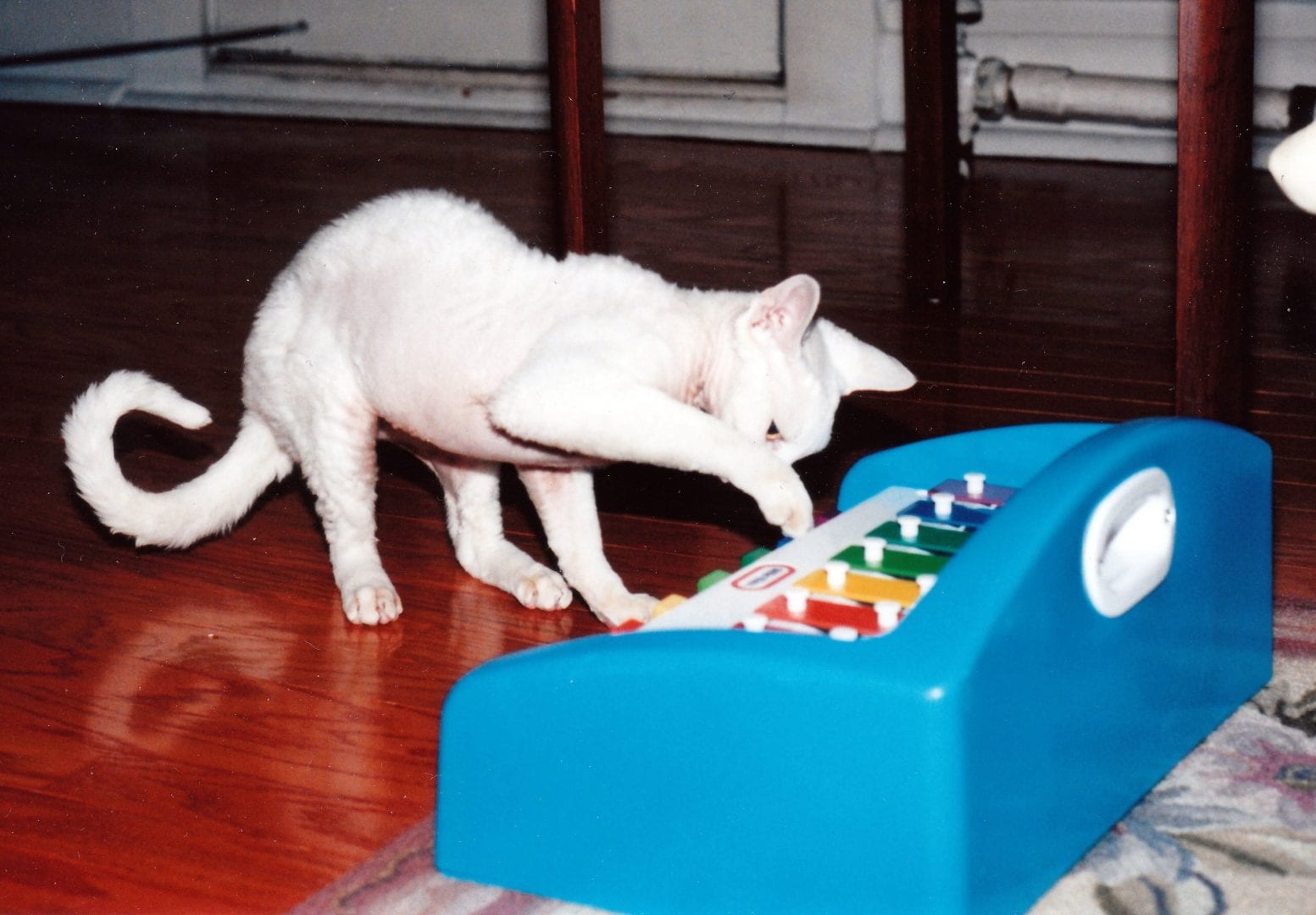 How can a cat change your life? 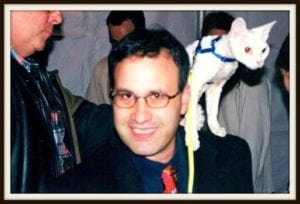 Ricky and I made appearances together, and he loved doing that!

“Today, I’ve lost my best friend Even in death Ricky has helped to dispel one more myth people have about cats.

My mother left a voice mail message that Ricky, our Devon rex cat, was again being featured on Animal Planet’s, program A Pet Story. I knew I’d be receiving an onslaught of email. It happens every time they rerun the show.

Ricky had also been featured on National Geographic Explorer, CNBC; Pets: Part of the Family, PBS, on a Canadian TV show called The Pet Project, and many other national programs including about every local TV station in Chicago. Just because this kitty belonged to a famous pet journalist doesn’t explain why Ricky had more face time on TV than some politicians – he also appeared with me many times on my own radio programs. It’s because Ricky was a virtuoso piano player, and he could jump through a Hoola hoop, over prone children or dogs doing a ‘down/stay’ in a single leap. I taught Ricky these and other tricks –including offering a ‘high four’ to prove you can train a cat.

From the time he was a kitten, we socialized Ricky by taking him places, and he love it. Like all Devon Rex cats, he only had a single coat of soft hair. In fact, there was so little on the top of his head, he looked like an ad for Rogaine. His elfin triangular face was framed between his over-sized ears. As a kitten, he was mistaken as a “deformed Chihuahua,” and a teller at a bank once thought he was a wind-up toy.

Sure, his unique look fascinated TV producers, but it was Ricky’s personality that was a clincher. Ricky actually learned to look at the red light of a TV camera. And he loved the attention, whether from TV directors or patrons at a pet store. Imagine walking into the pet store to find a cat sitting on a table playing a children’s piano. 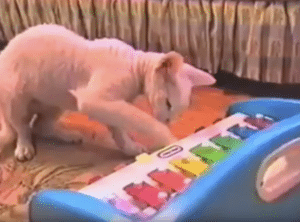 One of Ricky’s many TV appearances

She retorted, ‘Harry, you’re losing your hearing. And she began to sing. You are my sunshine, my only sunshine…’

Ricky wasn’t playing that tune either. No matter; he made two folks happy.

And what a pro he was. At another Petco appearance, they positioned Ricky right smack bad between the budgies and the gerbils. Despite those mind boggling distractions, he never missed a note.

Teaching Ricky was easy. He’d purr as I clicked the clicker, and then as I presented him a treat for playing a few notes on his piano.

It was three years ago that I took then one year old Ricky to see the veterinarian for a routine physical, and we toted his piano. After all, the office staff wanted to enjoy a private audience with their maestro client. It was on that visit that my vet heard a heart murmur, which later led to a diagnosis of feline hypertrophic cardiomyopathy by a cardiac specialist. It means Ricky’s heart muscle in the lower portion of the heart is thicker than it should be. Because of the thickening, the heart can not relax well or fill up with blood as it should.

I had heard of this illness – but had no idea how common it is, and how little veterinarians can do about it.

The good news is that Ricky never realized he was sick, at least not for several years. I dutifully returned to the cardiac veterinarian for ultra sound checks, and while the disease was progressing, it seemed a slow progression. Ricky pretty much trained himself to jump on my shoulder and actually “ask” for his daily dose of heart medication.

Anyone who ever met Ricky agreed he was a unique kitty. Even people who feared or disliked cats enjoyed or at least tolerated Ricky. He loved people, especially children. All of 8 lbs., this little dude ran our household. He called the shots. When other dogs visited, he instantly let them know he was king of his castle.

All that teaching I did had a downside, Ricky was always learning. He learned to open doors, and the doggie cookie jar at the vet office that goes “woof” when opened. He’d munch on a dog biscuit, and then toss one down to his waiting subjects – the dogs below. 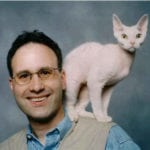 On Monday June 3, ironically just after A Pet Story was rerun on Animal Planet, Ricky had what amounted to a massive heart attack – and suddenly died.

I know from by reading the email that Ricky touched thousands, changing their image of what the potential of cats can be. But to me, he was simply my best buddy, ever. No dog will likely ever fill the place in my heart that Ricky lived in. He followed me everywhere. When I went to the bathroom, he was on the other side of the door waiting for me. He slept at my side every night. The connection we had is tough to articulate. He actually seemed to know what I was thinking about.

I realize the anecdotes filling the life of any pet can fill a book, but in his short time on earth, Ricky’s chronicles could easily fill two books.

Here’s my favorite, which legendary broadcaster Paul Harvey once featured: If Garth Brooks could perform in Central Park, I thought Ricky can play piano on the front steps of our condo building. At one such outdoor concert a 10-year old boy with Down’s syndrome walked by. He was enthralled by the piano playing feline. He starred at Ricky for several minutes, and then spontaneously he began to giggle. We’re not talking little giggles here. I mean full blown belly laughter.

His mother quietly said. “Billy’s father passed on two weeks ago. Everyone tried to get him to talk, to react.”

Just then, Billy, who was still in stitches, began to pet Ricky. Then Billy sat down and snuggled with Ricky now purring in his lap. I don’t know what secrets Billy shared, but he whispered to Ricky for several minutes. Just before he and his mom departed, Billy looked at Ricky and said, “I love you,” and then he kissed Ricky.

Ricky was a very small cat, but the hole he left in our hearts’ is enormous. Our house seems empty without him. And at least for now, our lives seem empty too.”

After Ricky’s passing, I launched The Ricky Fund to raise dollars to support funding to be study feline hyperthrophic cardiomyopathy (HCM). There really was no effective treatment for HCM, which is incredibly common. No one knows how many cats succumb to HCM annually, but it may be the most common cause of cats of indoor cats between the ages of about three or four-years to nine or ten years.

The Ricky Fund I launched with the Winn Feline Foundation has now raised over $100,000 to fund HCM studies.

Because of studies funded, we now know more about HCM, and how often it occurs. Also, for two breeds – Ragdolls and also Maine Coon cats – an easy and inexpensive genetic test (cheek swab) can determine if a genetic defect exists which may cause HCM.

This is all a start – but only a start. We need to do far more to save cats diagnosed with HCM. Please help support the Winn Feline Foundation Ricky Fund.