Setbacks for Bans on Selling Dogs/Cats at Pet Stores 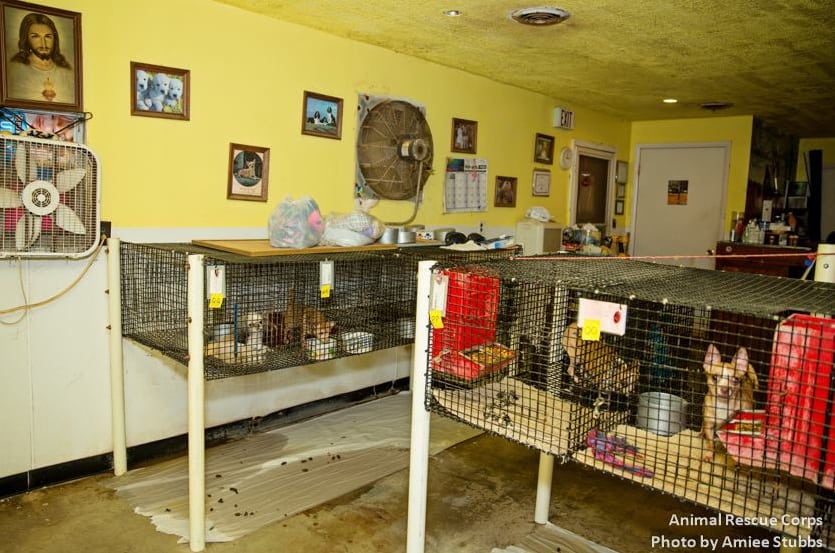 The Las Vegas City Council voted in November to repeal a ban that would have prevented pet stores from selling dogs, cats, and potbellied pigs that didn’t come from a rescue organization or animal care facility.

In a vote of four to three, the repeal from City Council and the Las Vegas mayor came with assurances from city officials that they will work on new restrictions to crack down on inhumane breeders. 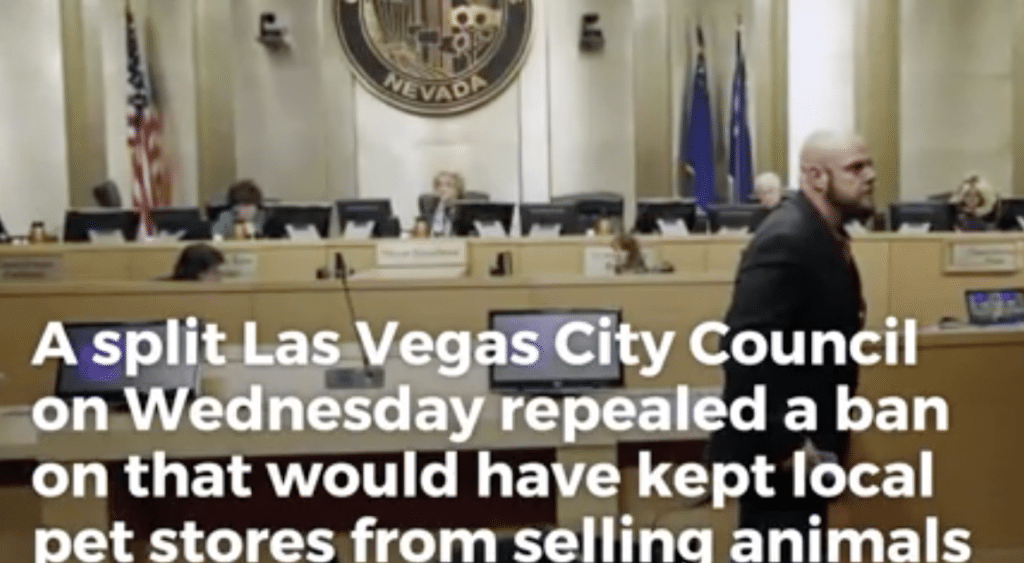 They maintain the answer to eliminate puppy mills isn’t to prevent pet stores from selling dogs and cats. However, city officials offer no specifics on how they plan to achieve this goal of eliminating puppy mills.

What seems clear is that all the dollars the pet store industry (Pet Industry Joint Advisory Council and American Pet Products Association), and the American Kennel Club (AKC) are spending is beginning to pay off.

Why in the world would the AKC support the survival of puppy mills—industrial/commercial breeders—over home breeders? 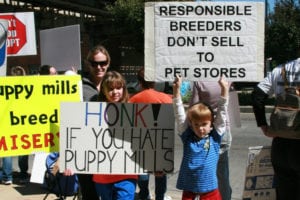 Clearly, the general public is increasingly horrified by the mills. But, even pet owners remain greatly unaware that dogs and cats sold at pet stores are sourced from millers, often through a complicated series of resellers, making it difficult to track. One thing is for sure: No responsible breeder ever sells to pet stores.

Beginning with an organic movement, which started online several years ago, more than 200 cities in the U.S. and Canada have enacted pet store sales bans, including Austin, Chicago, Ft. Lauderdale, Los Angeles, Philadelphia, and San Diego, to name a few. The most recent city to be added to the list is Rahway, New Jersey.

However, despite what pet owners and non-pet owners alike want, some communities remain resistant, contending as a defense they don’t want to close down small retailers, or, like in Las Vegas, they can do “other things” to prevent puppy mill sales. But no one knows what these “other things” are.

Of course, no one wants to close down retailers. Truth is, most pet stores don’t sell dogs or cats in the first place. The most significant players among pet stores are the big boxes: Petsmart, Petco, and Pet Supplies Plus, and none of them have ever sold dogs or cats. The majority of smaller independent stores want nothing to do with selling dogs or cats. The pet store industry is pandering to a handful of large players with large dollars to subsidize the efforts to fight the proposed bans. 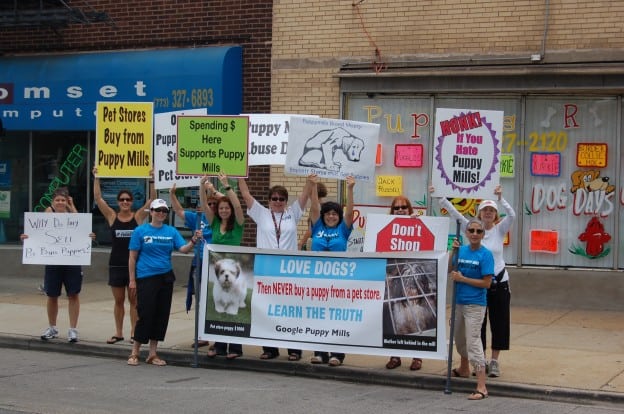 And if the bans overnight don’t close down puppy mills, that’s not the point. The point is to not support the millers. Someone has to defend the dogs and cats.

Two cities in Illinois have struggled to get legislation through because of push (and dollars) from the AKC and pet store industry, even though the public overwhelmingly supports the legislation.

Interesting that they put “puppy mills” in quotes, implying they are not real or that there is no definition of millers (a very old argument). No matter, once again, no responsible breeder ever sells to to a pet store. 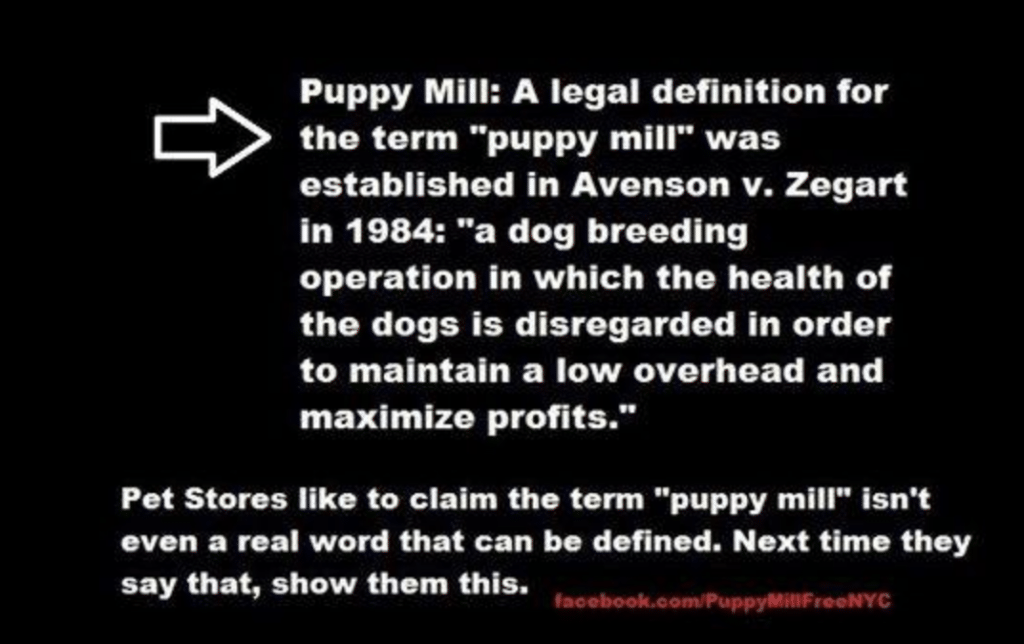 Then there’s this misleading and confusing statement from the Petland Naperville site: “The quality of our breeders is directly regulated by the United States Department of Agriculture (USDA), the same organization that regulates your children’s school lunches.” 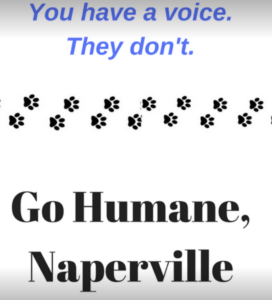 Two issues with that: First, due to the lack of transparency in President Trump’s administration, there’s no way to currently (for the most part) go onto the USDA website and verify that a specific facility has been inspected or not, and this is supposed to be public information.

Regarding schools (and this is directly from the USDA website): “The National School Lunch Program is a federally assisted meal program operating in public and nonprofit private schools and residential child care institutions. It provides nutritionally balanced, low-cost, or free lunches to children each school day. The program was established under the National School Lunch Act, signed by President Harry Truman in 1946.”

The school lunch program for children is obviously unrelated to animal welfare inspections, and the school lunches are not inspected in schools by officials.

At Dog Patch Pet and Feed in Naperville, Illinois, animals are adopted, rather than sold. This store demonstrates that the pet adoption model can and does work.

In Naperville, an organized group called Go Humane, Naperville represents the voice of the community, but the seemingly obvious issue of not allowing pet stores to sell animals from inhumane sources has become a political hotbed in the community.

The City Council in Joliet, Illinois, heard well thought out testimony from animal advocates and experts for many months before they voted last month overwhelmingly—7 to 1—to not outrightly prohibit the sales of dogs and cats at pet stores. 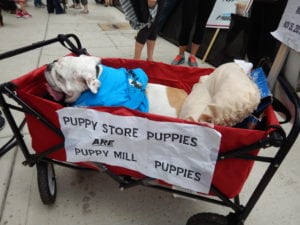 The grassroots movement had strong support from Joliet City Councilwoman Jan Quillman. And, despite compiling pages of testimony, one observer wondered if all the research was even read by other council members, who seemingly had little defense for their votes.

There were two different resolutions on the council’s plate: Version A and Version B.

According to a council memo, Version A basically mirrored legislation previously adopted in nearby Chicago and about 200 other communities around the country. It simply prevented pet stores from selling dogs or cats (although adopting animals from legitimate rescues and animal shelters is encouraged).

Version B, which was adopted, bans the existence of so-called puppy mills, and it bans unlicensed dog and cat breeders. “In very basic terms, it requires pet stores to only obtain dogs from a USDA licensed breeder, a humane society or rescue, or a hobby breeder who is not required to be licensed by the USDA,” the ordinance stated. 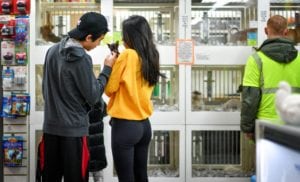 The problem with Version B is that no breeder in America is licensed, per se. Puppy mills are already banned by federal law, but they are still thriving. Information about USDA inspections is difficult to track down (because the USDA, as described, has limited the information to the public regarding any inspections or reports), and, because of USDA staffing, they simply don’t inspect facilities as frequently as needed.

Peggy Grandahl of Safe Pets for Joliet says, “What they did was useless legislation that can’t even be enforced, a waste of taxpayer dollars. Voters will not forget.” 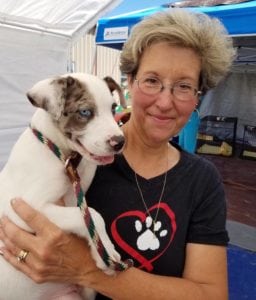 Morgan Drdak, founder of Safe Pets for Joliet worked hard to educate council members. She adds, “The most disturbing part of the decision was that it didn’t come as a surprise—not because the Council had indicated that they disagreed with us, but because they just didn’t seem to care.

“We spent three years finding out who Furry Babies’ breeders were and how horrifying their documented Animal Welfare Act violations were. We supplied photos from USDA inspections, undercover videos, everything to prove that this pet store was buying from puppy mills and the Council could be the ones to end it. But it became painfully clear, especially as decision time came closer, that they weren’t listening. Emails got no response. Requests for meetings went unanswered. We had more than 2,500 signatures on a petition, at least 300 emails from residents, nearly 400 signatures on a letter from our local rescue community members, but, in the end, their decisions were based on personal, uneducated experiences with pet stores and a lack of interest. It wasn’t about representing their constituents, it was about ignoring what was real and painful, taking the easy way out.”

But, the legislation limits where puppy millers and their brokers can deal and also enhances public awareness. And by doing this, at least some lives may be saved.

The reality is that puppy millers have learned to effectively sell online and even mask themselves as legit rescues, sometimes selling designer dogs for large dollars.

And, with big dollars from the AKC and the pet store industry supporting their efforts, the challenge is clear. 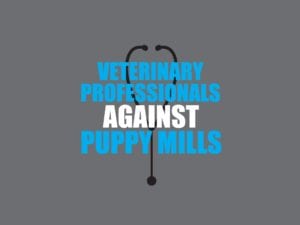 What you can do:

* If your community allows pet store sales of dogs and cats, talk with the Puppy Mill Project about enacting laws to prohibit that.

*Though you may “feel sorry” for puppies and kittens sold in stores, don’t buy them. Buying only increases their bottom lines.

*Join the nonprofit Facebook page Veterinary Professionals Against Puppy Mills (there is no cost currently to do so), which the National Association of Veterinary Technicians in America supports, and tell your veterinary professionals to like the Facebook page, too.