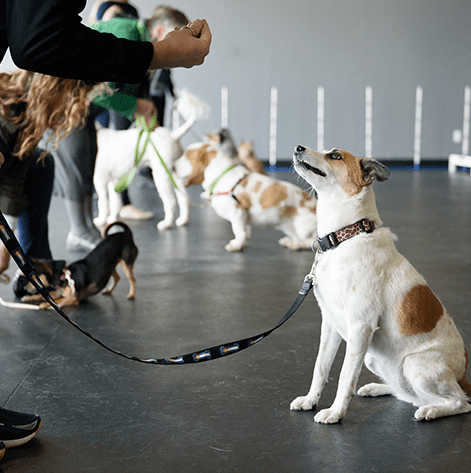 Should dog trainers be licensed?  In concept, “yes.”  But I explain why this will not an easy endeavor.

The issue has resurfaced as a result of an excellent, thoughtful report from Lourdes Duarte, reporter at WGN-TV.

Prompting the report was Chicago pet parent Reyna Lujano who hired dog trainer and owner of Canine Training by Tilman (who’s website and Facebook pages are now unavailable) to train and board her two pit bulls. She maintains she did her homework, choosing someone with a good social media profile who had worked at a reputable dog training business on the city’s North Side.

Of course she never expected what she offered in video for the TV report when she picked up her dogs two weeks later, as according to the video one dog was bloodied and the other apparently malnourished.

Lujano says the trainer told her the dogs suffered injuries because they fought each other. But she questions why she wasn’t immediately notified, the animals weren’t given immediate medical attention, if this is even true as by her accounts they dog get along fine at home.

The trainer has denied any wrongdoing. An administrative hearing on this case is pending.

State Senator Craig Wilcox (R-McHenry) isn’t a fan of regulation but he’s a fan of dogs and therefore wonders why there isn’t more regulation to protect dogs.

I am totally not defending the trainer, but I also don’t understand how if Ms. Lujano, who clearly adores her dogs, did her homework she didn’t come across a myriad of articles written by pet advocates and behavior consultants (such as myself) warning against boarding and training or “dog boot camps” for many reasons.

In this instance, the dogs were either returned from the training facility with prong collars or the dog’s parents were previously using them and prefer them. No matter, how about a suitable harness?

I agree – in concept – with licensing dog trainers. This would need to be a state-by-state effort. Would the license be given like a driver’s license where you pay dollars periodically but also take an initial test and renew periodically? Who writes the test? Who administers the test and the dollars to pay for this? What if a trainer fails the test? Is State government prepared to take on yet another thing (in Illinois in this story but that question applies to any state)?  And do we want government to oversee dog training?

Asking the public to look for certification is another matter and that should be happening now. Certainly there are certified trainers who don’t follow standards of their certification or even the industry as whole.  And there are a pawful of excellent trainers who are not certified. But certification means a lot from the International Association of Animal Behavior Consultants, Association Pet Dog Trainers, Victoria Stilwell Academy Trainers, Karen Pryor Academy Trainers  . And the goal is to completely avoid trainers who rely on punishment to train, seems obvious but people still do go to trainers like this. And that is why I agree in concept with licensing – just unsure how to implement this in the real world.

And definitely don’t take the word of social media or anyone else except yourself regarding trainers. Audit a class and see the trainer with your own eyes; if people and dogs both aren’t apparently having a good time learning, consider another trainer.