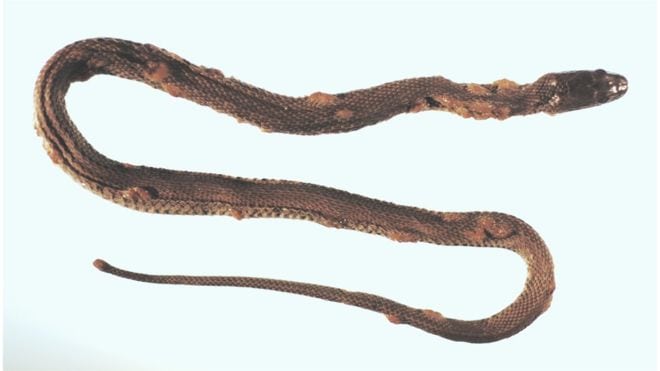 Are you concerned about snakes? If your answer is no, you might want to brace yourself for more rodents.

So, which is worse: snakes or rodents? Rodents, because they may cause disease in people.

A fungal disease has been found in 23 species of wild snakes in the U.S. and three in Europe. The fungus causes lesions on the snake’s body, leading to infection and usually death, according to a report published in the journal Science Advances.

Snakes aren’t alone. Fungal afflictions have had devastating impacts on a number of different species in recent years. Chytrid fungus has reduced frog populations all around the world, while white nose syndrome has killed millions of bats in the U.S. Frogs dine on mosquito larvae, and bats eat adult mosquitoes. And mosquitoes, of course, spread disease to people and spread heartworm to dogs.

Snake fungal disease (SFD) has been found in some of the most common species, including rat snakes, milk snakes, garter snakes, and vipers in eastern parts of the U.S. It has also been detected in Europe, including in the U.K.

While molting can help afflicted snakes, many die from infections. The fungus also causes changes in snake behavior, causing them to spend more time basking in the sun as their skin molts, putting them at greater risk  to sudden changes in outdoor temperature, starvation, and attack from predators.

Researchers are working on a treatment, but getting to sick snakes isn’t easy. And, snakes aren’t likely to voluntarily slither into local veterinary offices.