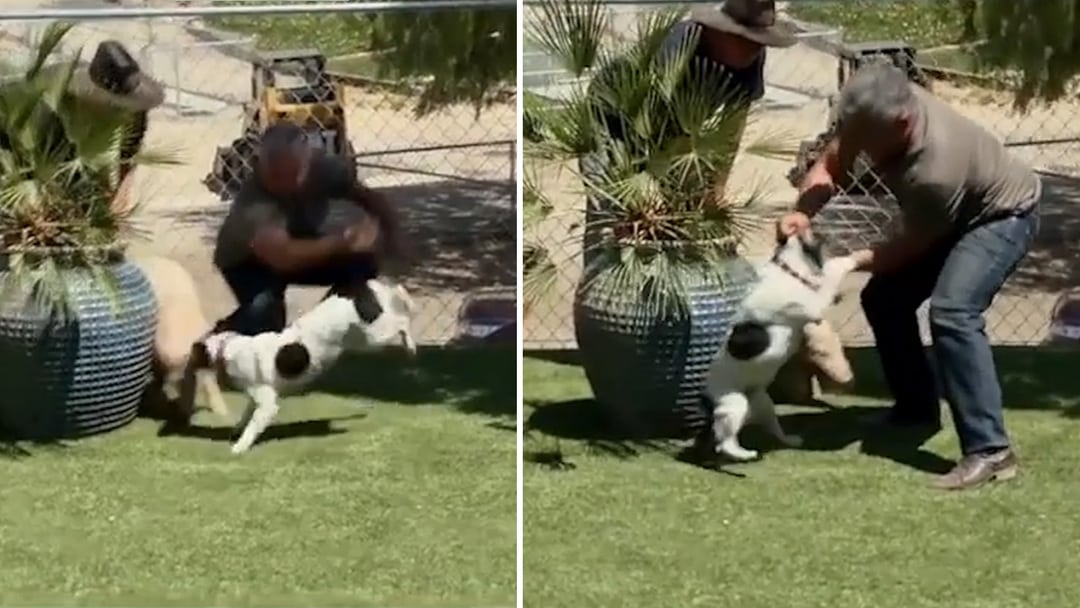 Cesar Millan goes by his gut, and his own experiences….that’s fine, except he’s also ‘teaching’ millions watching on TV. Over the years, some of those methods have clearly been inhumane, and his general approach is based on dominance theory – that if you don’t dominate your dog, your dog with dominate you.

That’s rubbish!! Still, he persists, because it works for him, or at least it seems to on TV. 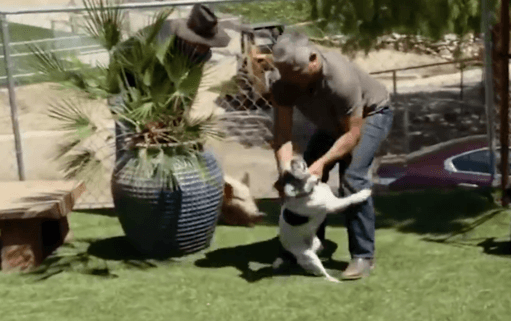 Millan’s response included making his “Tsssk” sound and attempting to roll the dog over. Now, what does that prove?

Millan is now being investigated for animal cruelty as a result of that ‘pig-a-sode.’

“A recent airing of the popular TV show Cesar 911, in which a dog being trained by Cesar Millan attacked and injured a pig, has elicited many opinions about dog training methods. The American Veterinary Society of Animal Behavior (AVSAB) would like to broaden the discussion by pointing out important facts about training and about animal welfare during training.

AVSAB is a group of veterinary and research professionals with a special interest in animal behavior. We support the use of scientifically-based methods of training and behavior modification, and we promote interactions with animals based on compassion, respect, and scientific evidence. AVSAB supports the use of evidence-based medicine (using research-supported scientific evidence to make decisions about the care of individual patients) in designing behavior modification and training plans for animals.

Current research in dog training supports changing the dog’s environment, and using positive reinforcement, as the most effective method for modifying a dog’s behavior. 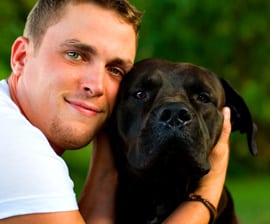 If positive reinforcement dog training, and scientifically based methods work best – then why wouldn’t you use them? Well, it’s not his schtick or in his brand

Punishment-based training methods may be advocated by those without an appreciation of the current status of science in dog training. Although such methods can be effective in the short term, science tells us they are likely to exacerbate an animal’s fear and actually increase aggression in the long run. When the problem behavior involves a negative reaction to another animal, attempting to elicit the bad behavior so it can be “corrected” is not only ineffective, it puts the target animal at risk of injury. Such training methods are unacceptable. 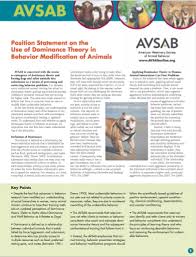 Research in canine behavior is continually evolving through lab and field research trials. Behavior professionals continually further their knowledge of behavior in order to offer the best treatment plans to pet owners. AVSAB recommends you choose a trainer who understands and uses reward-based training, and who keeps abreast of developments in the field.

To read the full position statements from AVSAB on dominance and punishment, and for more information on how to choose a trainer, please go to http://avsabonline.org/resources/position-statements.”

First, I want to congratulate AVSAB on doing the right thing – speaking out on this topic.

I also want to further elaborate on some of the AVSAB points:

Here are two facts: Dogs learn more efficiently using positive reinforcement methods, and such methods are kinder to the dog.

Millan contends his methods are positive. Sometimes, in my view, positively awful. But that’s an admittedly cheap shot. I welcome Cesar to (again) appear on the radio with me, and explain how his methods in this ‘pig-a-sode’ were positive. And while he spoke (and to his credit, he did that) of creating a positive association between dog and pig, at least on screen, we don’t see even the slightest effort in that regard.

I will repeat, for emphasis, what AVSAB says eloquently above: When the problem behavior involves a negative reaction to another animal, attempting to elicit the bad behavior so it can be “corrected” is not only ineffective, it puts the target animal at risk of injury. Such training methods are unacceptable.

It’s apparent that the pig was pushed to squeal,  and predictably (based on his dog’s history) Simon responded. 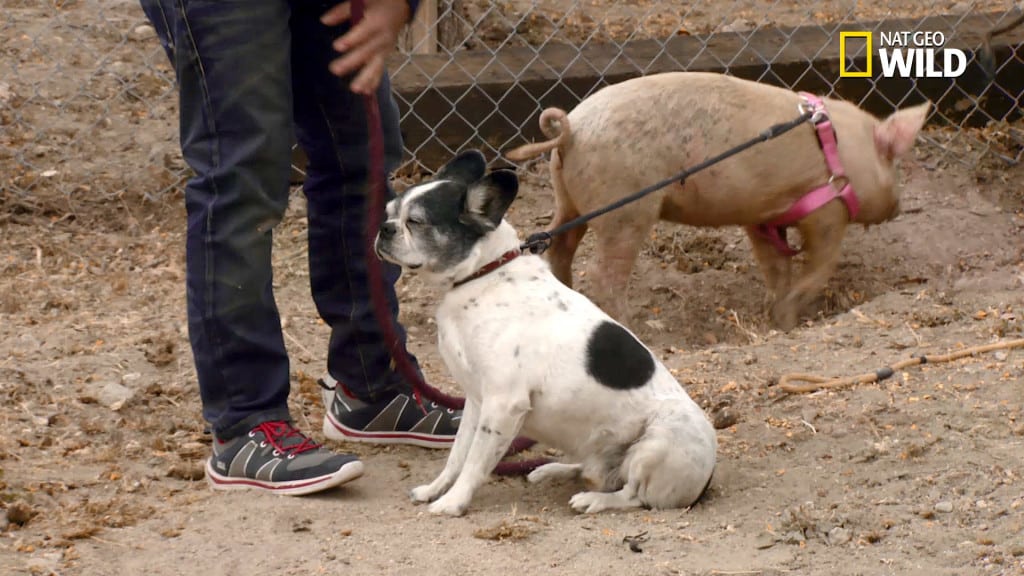 Simon is doing all he can to avoid confrontation with the pig, pretending he’s not there….But Millan actually forces the issue. Kind of a ‘pig headed idea’

Let me put it another way. You show up at the doctor and complain, “My elbow hurts when I do that.” The Doctor’s response might be, “Do you really need to do that?” It’s training 101, it is considered unnecessary and unproductive to encourage animals to practice problematic behaviors, and in some cases even inhumane. However, what happens when an animal practices a behavior that’s complained about on TV is that producers have good video footage of the behavior. Good TV, yes. Ethical behavior consulting, usually not.

I’ve read that in order to prove animal cruelty, there needs to be proof that demonstrates Millan meant the dog to hurt the pig – well, I even agree that’s not likely the case. Of course, I am no lawyer and I don’t really know. I do know that Millan still has clearly not learned some pretty logical lessons, and apparently isn’t interested.  Most important, millions of viewers still buy into this dangerous nonsense.