Solution to Rats May Be Cats in Rome 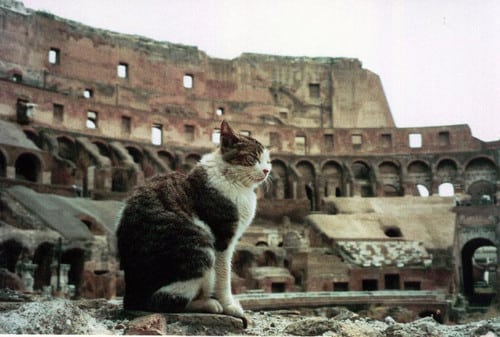 So you think there’s a rat problem in your city? In Rome, Italy, experts estimate there are more than two rats for each of the city’s 2.6 million residents. That’s a lot of rats.

With so many rats, the issue has become a hot political topic. Mayoral candidate Antonio Razzi says, if elected, he will bring import 500,000 cats from Asia and charge them with rat-catching duty.

“I have already made plans to bring over the cats, which will be deployed at strategic points throughout the city,” Razzi continued.

Of course, the Eternal City has been home to cats since ancient times. Feral felines can often be seen lazing among the city’s archaeological ruins and city squares for generations. However, the number of wild cats in the city has fallen dramatically since the late 1980s and 1990’s, when a policy of spaying and neutering all feral cats and dogs in Rome was adopted. For those that question TNR (trap neuter return) effectiveness, it’s clearly worked in Rome. Meanwhile, the rat numbers have exploded.

Many other reasons apparently account for the surge in rat numbers, most particularly the City’s problem of dealing with trash.

The rodents have even been spotted at some of Rome’s most iconic tourist sights. Last year, they invaded the Trevi fountain, while in March a ticket office at the Colosseum was closed when a rat died in the ceiling cavity, causing blood to drip onto the counter below.

Razzi points out his plan is cost effective – which is true. He doesn’t mention spay/neutering the cats, which I sure hope he has in mind. He calls his idea innovative. Well, Chicago’s Tree House Humane Society’s Cats at Work Project has already been doing just what Razzi suggests. Tree House will re-locate already spay/neutered feral cats to where there are rat problem. Indeed, it’s true, rats move in and cats tend to relocate.

Next time you visit Rome, bring your appetite, your camera, and if Razzi gets into office, catnip.