Some Are Determined to Continue Puppy Mill Pipeline in Illinois 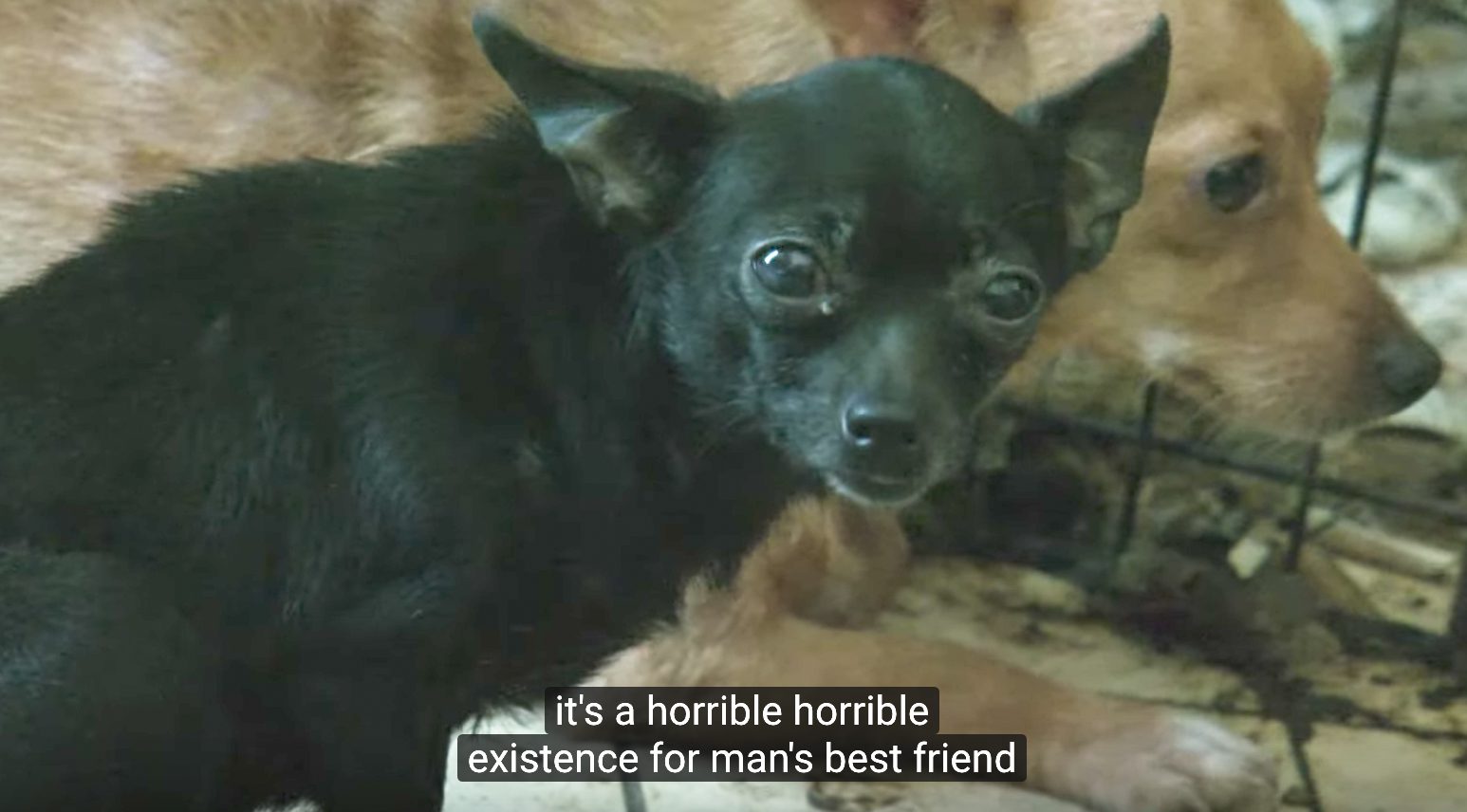 Do you support puppy mills? Last year, Illinois became the fifth state to ban sales of dogs and cats at pet stores. However, the pet store industry and a pet store chains affected are trying to actually reverse the law, and spending a whole lot of money in the process, and even wrote HB 4643 which shockingly has some momentum. If you are in Illinois, please contact your state senator and state representative. 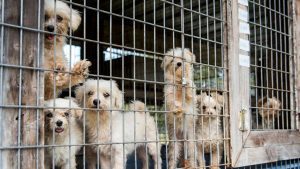 If you aren’t already aware: No responsible dog or cat or rabbit breeder EVER sells to a pet store. Of course, responsible breeders want to know who is purchasing their pet.

Pet stores gets their dogs from puppy mills and large commercial breeding facilities – and there is never transparency.

There are three points a group named “Protect Our Pets Illinois” is attempting to make:

#1. Pet stores will go out of business If they can’t sell dogs or cats

My answer: I don’t want anyone to lose a job or stores to go out of business. However, there are plenty of pet stores which only sell pet supplies and perhaps fish and small animals. Selling dogs and cats isn’t a requirement to keep stores open. However, it’s a requirement if you want to support an unethical industry and often rip off customers.

Selling dogs and cats from sources the pet stores use is unethical and supports an inhumane industry. These pet store sold puppies are more likely to be riddled with medical and/or behavioral issues. Even simple house-training can be a challenge since the puppies are typically forced to defecate in their cages at pet stores. And even IF the dog sold is sound, how about the mothers of these dogs maintained as breeding machines? I don’t want people to lose jobs, but this unscrupulous practice must stop for the sake of consumers and mostly because man’s best friends deserve better.

#2. Minority pet parents don’t have access to purchasing a pet, so we need pet stores to sell dogs and cats

Some legislators unbelievably can’t see through or more likely don’t want to see through this bizarre mirage. Mostly, pet stores selling dogs/cats are not in low-income communities. Generally, animal shelters are far more accessible, and shelters often have services geared for minority communities, such as low-cost veterinary care and/or multilingual resources, etc. And certainly, shelter and rescue price points are far more affordable, hundreds of dollars to adopt compared to thousands for purchase of a pet store pet. 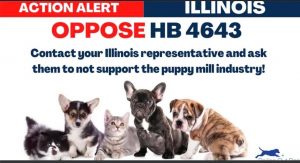 If these large pet store chains truly cared, instead of spending countless thousands of dollars on lobbyists attempting to forward this bogus argument, they could give-a-way pet food and supplies to support pet parents with limited means.

This is true – I agree – the Illinois law won’t eliminate puppy mills. However, it will at least stop the puppy mill pipeline into Illinois, as four other states and over 400 cities have accomplished. 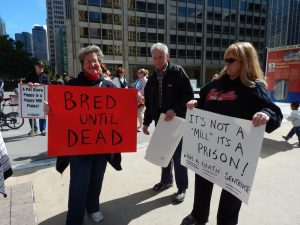 With each city and each state (several more states will likely ban pet store sales of dogs in 2022), puppy mills have a tougher time. The argument that puppy mills will focus more on online sales has already happened, it’s not new. And to stop this, the Federal Government must step in. The good news is that there is no demonstrable evidence (based on four states that had previously banned sales of dogs/cats at pet stores) that online sales go up when the ban goes into place. Its’ true, purchasing or even adopting a dog in 2022 can be a tricky proposition but that is another topic for another time.

Meanwhile, if what the pet stores do is so wonderful, for starters, why aren’t they transparent about where they source their animals from?

As Marc Ayers, Illinois Director of the Humane Society of the United States points out on Facebook, “Protect our Pets, AKA Furry Babies, is pushing a phony attempt to ‘upgrade’ breeding standards and “stop puppy mills,” via HB4643.

“I can’t help but notice their top supporter Mr. Sparks was fined over $18,000 in Chicago for unsanitary conditions inside his pet shop, dirty cages, and failure to provide water to his animals. He was also violating the intent of the humane ordinance.

If Protect our Pets wants to raise standards, I suggest starting with your own supporters, (referring to this pet store owner who was tagged with several violations from the City of Chicago among others who sold puppies in Chicago).” Confirmed HERE. 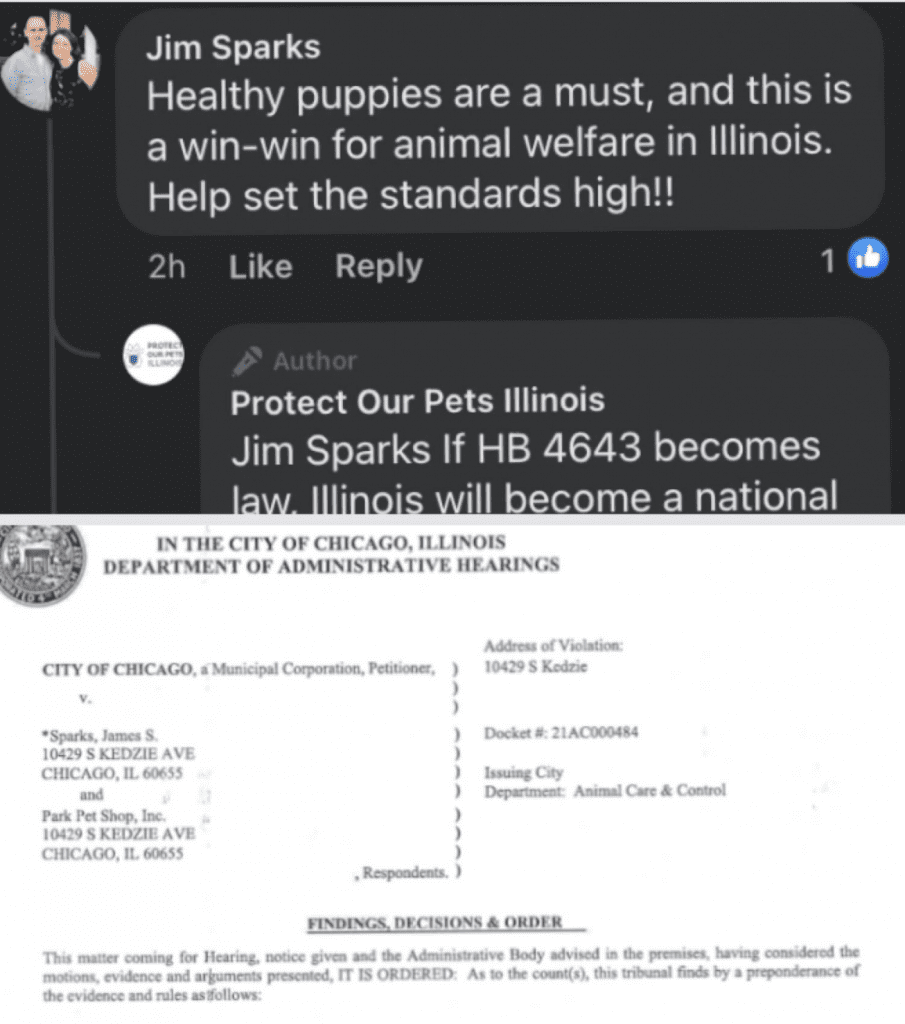 Aside from contacting an Illinois State Representative or State Senator, you can sign this petition from Best Friends.