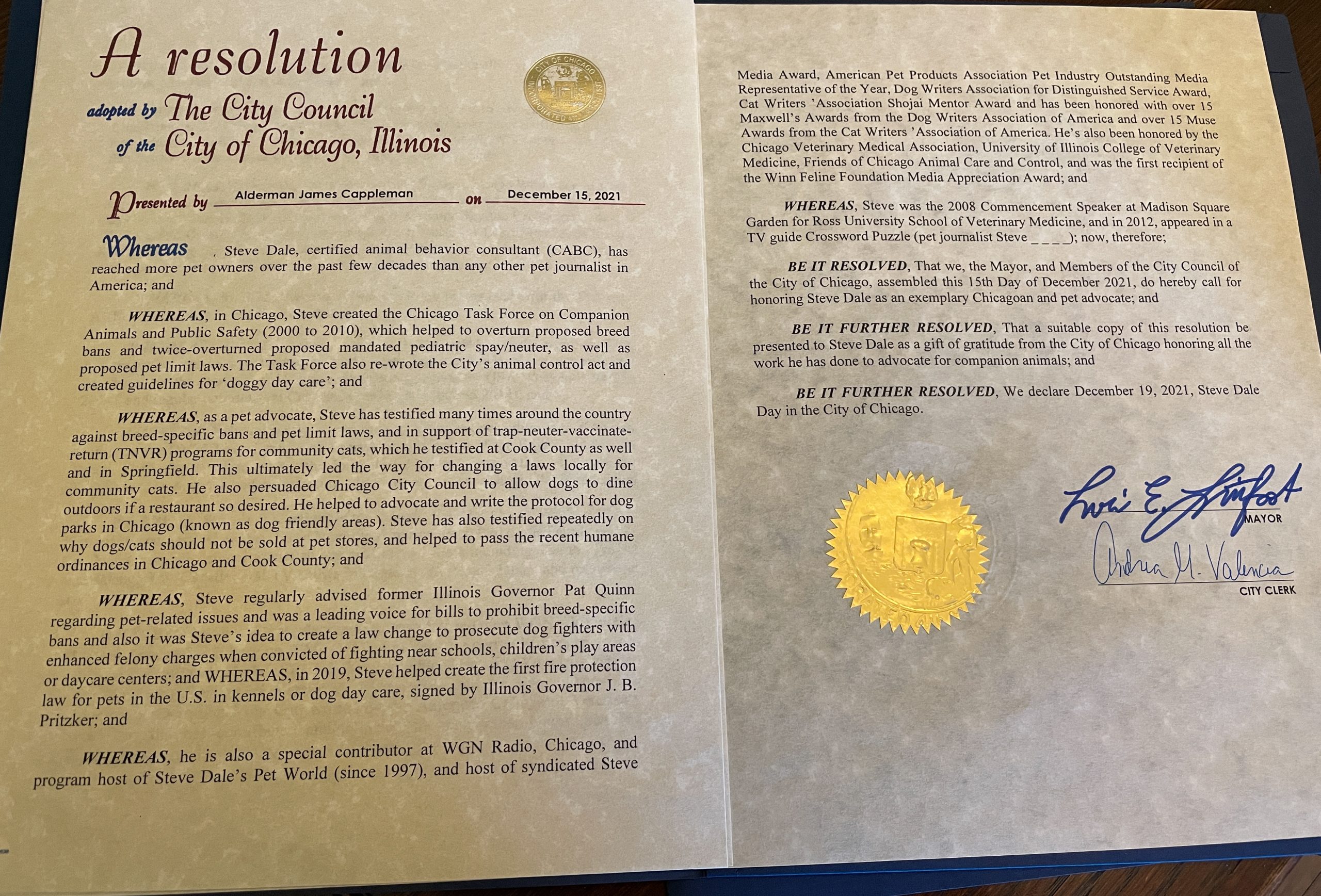 I was supposed to be on WGN radio today to talk about this but the National Football League last minute adjusted their schedule, and my on air schedule was adjusted as a result so I’m not on the radio again until Christmas Eve 3 to 5 p.m. CT.

Today (December 19) has been proclaimed Steve Dale Day in Chicago by the Chicago City Council and Mayor Lori Lightfoot.

This happened because of my advocacy and commitment for companion animals, and creation of the Chicago Task Force on Companion Animals and Public Safety (which I co-chaired with Cynthia Bathurst), from 2000 to 2010. The Task Force reported to Alderman Gene Schulter, who created a resolution many years back and did apparently announce a proclamation to honor me at City Hall but I was a no-show as that was the day my dad passed away. Ald. Schulter retired at that time, and the proclamation is still “in the mail.”

When I told my Alderman James Cappleman this story, he said “Let’s just do this again.” And that is exactly what happened.

While my name is on the Proclamation honoring my work, I don’t stand alone. If it were possible, the proclamation would include hundreds of others I have worked with, including veterinarians, veterinary technicians, dog trainers, shelter and rescue workers and shelter volunteers – many are in the trenches every single day. I just happen to have several giant platforms. And in Chicago, WGN Radio has been just that since 1997.

Without me having the 50,000-watt bully pulpit at various time slots, including Saturday and Sunday evenings and Sunday afternoons, there’s little doubt that breed specific bans (banning dogs called pit bulls), pet limit laws and a tax on rabies licensing would have happened. In addition, Illinois wouldn’t have been the first state to implement a pet fire safety law or to prosecute dog fighting as an enhanced felony if near a school or playground, both my ideas. Most of all, when I took listener phone calls on my Steve Dale’s Pet World, WGN Radio show, I was able to help countless families with pets having all sorts of behavior problems.

I can’t stress it enough – no one does anything alone, and so many have showed me the way.

At risk of offending any I don’t mention, I will offer a few names anyway who have had a significant impact: Karen Okura, head trainer Anti Cruelty Society; Dr. Sheldon Rubin, veterinarian who was at one time the most frequent guest on my WGN Radio show; legendary dog writer the late Mordecai Siegal who said “I see something in you” so many years ago; the late Dr. R.K. Anderson, grandfather of veterinary behavior; Dr. Karen Overall, veterinary behaviorist and inspiring teacher; all veterinary behaviorists for leading the way; Dr. Marty Becker, creator of the transformational Fear Free initiative; Matt Bubala, syndicator of my national radio shows; Marc Ayers, Illinois Director Humane Society of the United States; Cari Myers, founder Puppy Mill Project and Dr. Natalie Marks. AND so many more, particular my listeners and those who follow my blogs and website.

Also, I thank the Winn Feline Foundation (now EveryCat Health Foundation) for allowing me to create a fund to raise dollars to eradicate or treat feline hypertrophic cardiomyopathy, and thus far have raised nearly $300,000.

My profound disappointment is that my parents aren’t here any longer to see that I’ve been honored by the city I love, an honor rarely bestowed in this way I am told. And that I met with the Mayor at City Council.

My sister Lori is here, and most importantly my wife Robin – who plays a role in everything I do.

On Steve Dale Day, consider adopting a new pet or simply hug your pet – well, if you have a pet hamster, don’t squeeze too hard.

The entire proclamation is here.