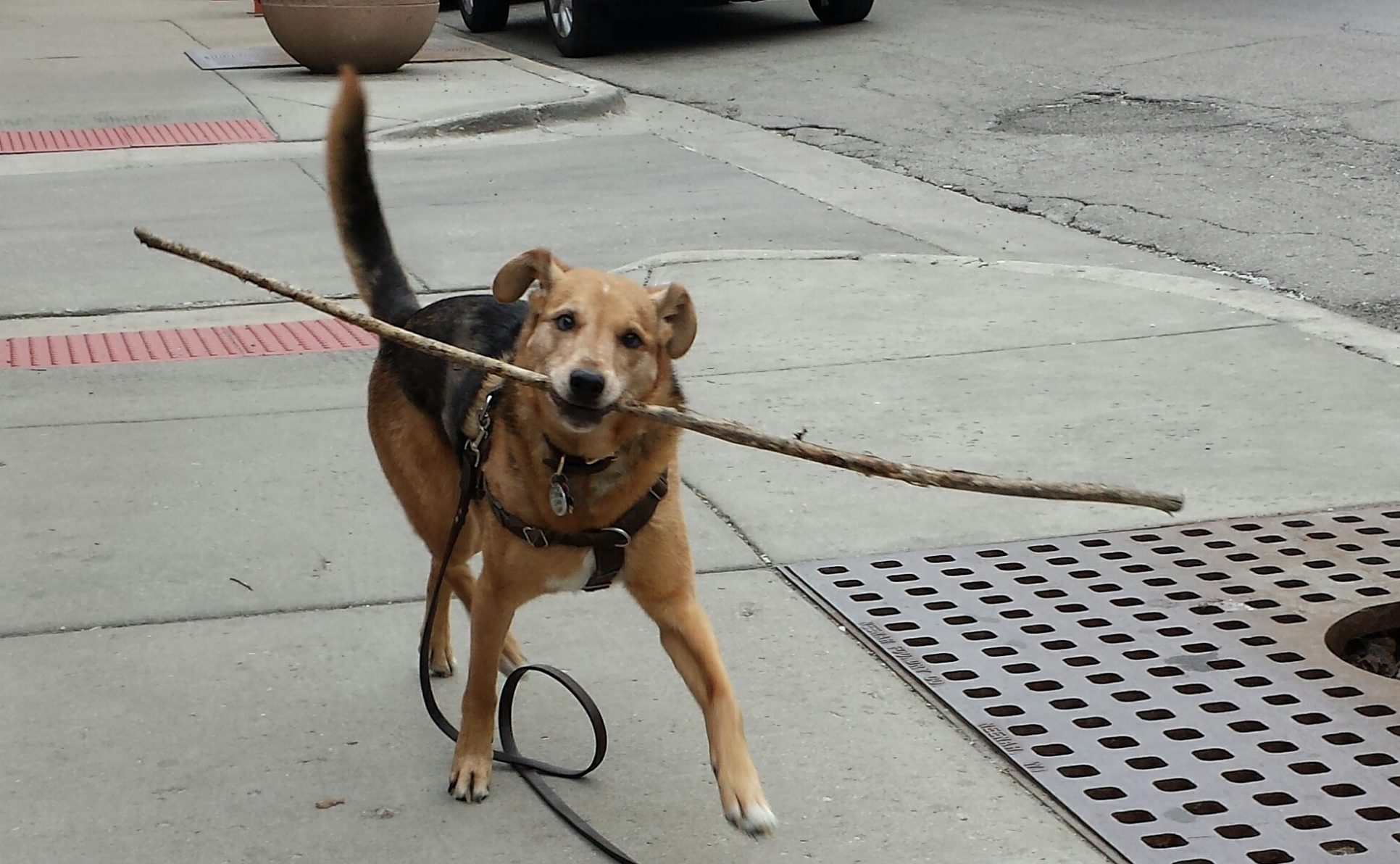 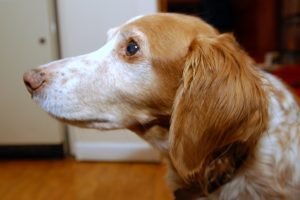 National Pet Memorial Day (this year is Sunday, September 13) is to help us to remember all pets who have crossed the Rainbow Bridge, particularly those who have served either in the military or as service or assistance dogs. 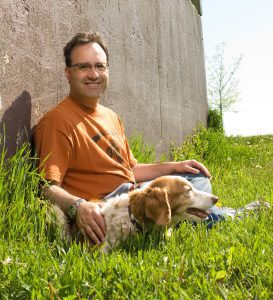 National Pet Memorial Day is also about our own personal pets who have crossed to another place:

A rescue Brittany named Chaser changed my life. Without Chaser, I’m unsure I would be doing for a living what I do today. I am told my various columns, radio shows and TV spots, book contributions as well as my activism, has made a difference for so many pets. Therefore, it’s made a difference for so many families since pets are members of the family. When given the chance, I wanted to help others as Chaser did for me.

What’s more, Chaser had a severe case of separation anxiety. Drugs and nutraceuticals and other products used commonly to treat today weren’t available 30 years ago. Even behavior modification techniques were in their infancy. Buoying confidence with behavior modification as Karen Okura, then of the Anti Cruelty Society in Chicago, taught me and patience ultimately led to a pygmalion transformation into My Fair Canine. One sign of separation anxiety is hyper-attachment, and for life we remained hyper-attached on both ends of the leash.

Without Chaser in my life, it’s not likely I would be writing this column today. 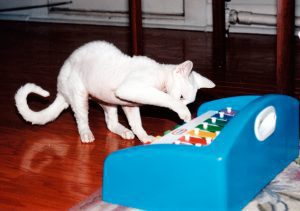 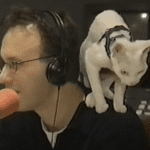 Ricky helps me to be on the radio

Ricky the Devon Rex cat was rather famous in his day, appearing on national TV and even international programs for his piano playing prowess. He was featured on Paul Harvey’s national radio show twice. Long before YouTube, Ricky demonstrated to the world what cats can do, and the intense bond they can have.  Long before the days of alleged political hoaxes, people thought somehow it was smoke and mirrors. It was real, of course, as Ricky wasn’t only a little “Meowart ,” he would jump through hoops, over prone dogs, sit, and even come when called  to name a few of his little “tricks.” Mostly, what I miss is the bond we shared, which I fear I will never again have a with a cat.

Ricky died young of a common heart disease in cats, called feline hypertrophic cardiomyopathy (HCM). Today Ricky’s memory lives on with the Ricky Fund, which continues to raise money with the non profit Winn Feline Foundation to  support HCM research. No successful treatment, yet. But gains have definitely been made as a result of the fund, having raised well over $100,000. I do hope a treatment will occur within my lifetime, but require help of cat lovers to get this done.

I’ve written about Ricky in several books, most recently in Decoding Your Cat, authored by members of the American College of Veterinary Behaviorists. 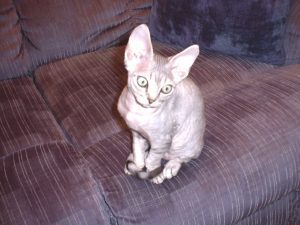 Ringo wasn’t with us very long, and was the most heartbreaking loss of all.

Ringo, a Devon Rex cat, succumbed to feline infectious peritonitis (FIP) when he was only six month old. It’s the Winn Feline Foundation’s persistence, often led by the dogged determination of Dr. Niels Pedersen, now distinguished professor emeritus University of California, Davis that has led incredible advancements. When I joined the Winn Feline Foundation Board of Directors around 15 years ago FIP was even then not completely understood, and was regarded as a fatal disease.

If Ringo were diagnosed today, he might have lived. At the Winn Feline Foundation Symposium Purrsuing FIP and WINNing held last November at UC Davis, for the first time FIP was described as treatable. There’s still a ways to go, but this is clearly the most significant breakthrough in feline health in my lifetime. Every kitty, like Ringo who tragically died very young, must be remembered and I suggest celebrated. Most certainly kittens continue to die of FIP, but the change is absolute and there will be no going back. 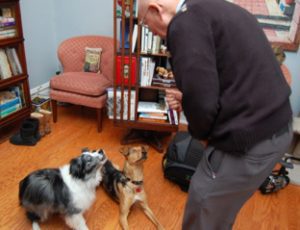 Lucy was a Miniature Australian Shepherd (these days, they’re called North American Shepherds or American Shepherds). She’s was spirited and had a wonderful sense of humor, which served her well in her work as a therapy dog, mostly at what was then called the Rehabilitation Institute of Chicago.

She loved performing, particularly for little kids. One of my favorites – and I would do this without a single had signal, I’d say “Lucy, say something in Spanish.”

It wasn’t a bark but more like singing, and she was funny and I believe she knew it. When she sang people of all ages laughed, or at the very least smiled. 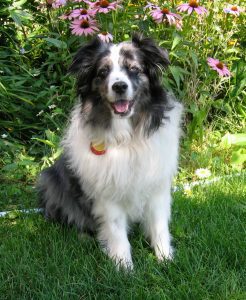 Then I’d say, “Say something in Indonesian”

And again Lucy responded with the same “Wa-Hoo.”

Then I might says, “Impress me with your Mandarin.”

Again, without a single cue – she would be silent. Then I would follow up and say, “I you don’t know that one. Can we try French?”

Again, “Wa-Hoo.” Kids loved it, and adults too. 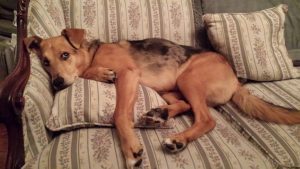 Ethel was rescued from Chicago Animal Care and Control, where she and her littermates were dumped in a box as puppies. She had unusual looks, and appeared to be some kind of designer dog – though clearly a mutt. As a puppy, when people insisted she was a pet store purchased designer dog, I called her a King Daley Shepherd. It sounded fancy – but indeed she was a mutt.

With family and friends, she couldn’t be more affectionate, snuggling close to you – not good enough – actually on you. Fair to say, she was a special love of my life. Ethel passed away in last winter and suddenly of a type of blood cancer, called hemangiosarcoma. Many many readers wrote how Ethel’s adoration for sticks, and #stickoftheday posts in Instagram brought joy into their lives. The City of Chicago still hasn’t reimbursed us for all the sticks she cleared from city streets.

Our hearts will never be completely healed but each of these beloved families brought some very special into our lives, and remember them on National Pet Memorial Day and every day. 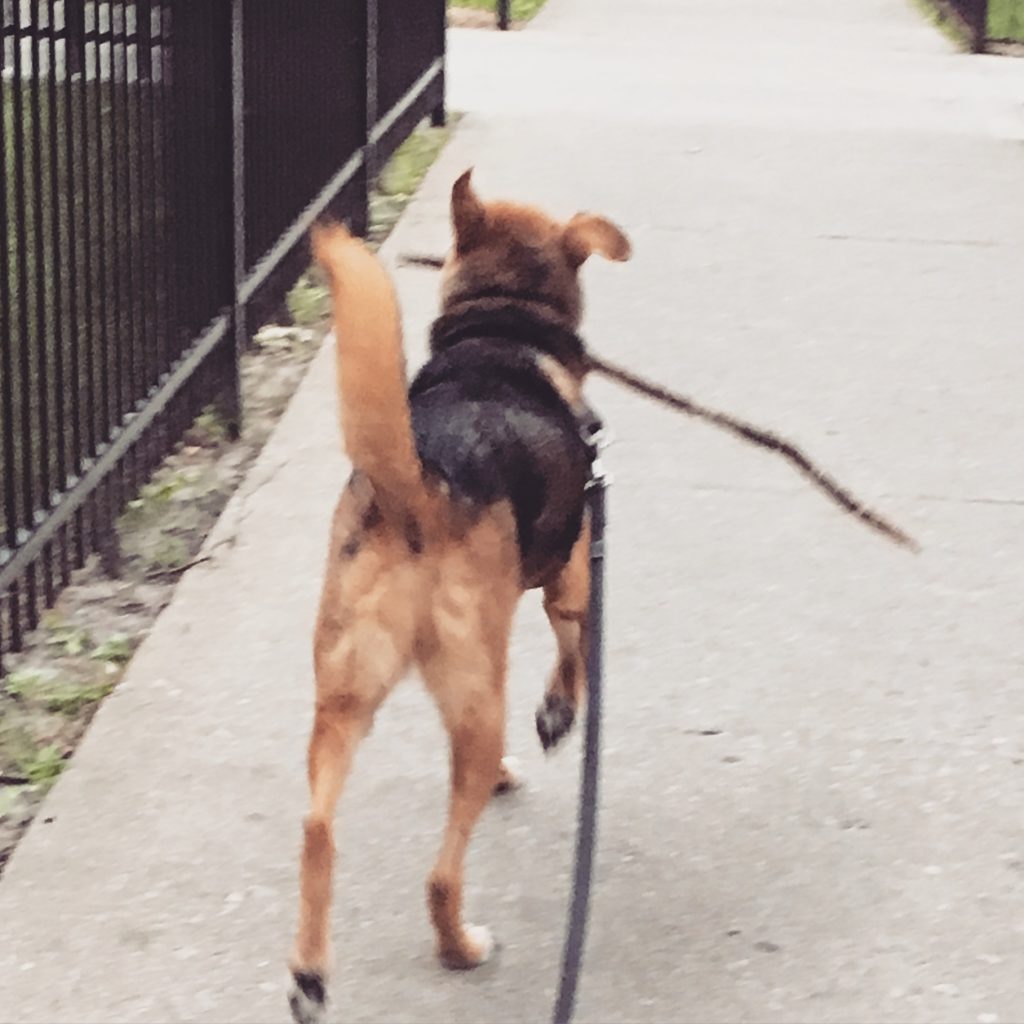