With all the vitrial and anger happening in our country, the last thing we need is a Canine Intervention program which takes it out on dogs. But that’s what Netflix is apparently set to launch with a reality TV show starring Oakland, CA-based dog trainer Jas Leverette called Canine Intervention, featuring his self-noted advanced leadership system. I’ve been inundated with email about this guy who says his dog training system is known around the world.

This is the NetFlix trailer. 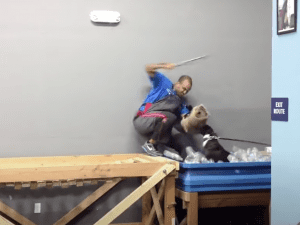 Taken from a YouTube video on Mr. Leverette’s channel. He is training working dogs in this shot – unsure what that work is or for whom the dogs are working.

I’ve been hesitating to comment because the trailer (while concerning) is only a teaser for the program, and obviously since the series has not premiered, yet, I’ve not viewed it. Perhaps, Netflix can hook me and others  with some real certification an advance opportunity to see the series.

Speaking of which, on his website Mr. Leverette calls himself a behaviorist. But that term is relegated to veterinary behaviorists or PhD animal behaviorists, and he is neither. Nor is he certified by the International Association of Animal Behavior Consultants, as I am. While I don’t believe this is illegal, it’s misleading because Mr. Levererette is then not a behaviorist (no matter how knowledgeable he is about dogs).

And IF he is as knowledgeable about dogs as he says, then why proudly state to use techniques which are punishment based and aversive. As Cesar Millan demonstrated, for the purposes of instant reality TV (which is not always so real) you can moderate a dog’s behavior. But to what end? There’s a reason why Petco just stopped selling electronic collars (e-collars) and they remain banned in many nations around the world. Even IF you can argue that in his hands, this equipment is helpful to save lives, then what about viewers without his dog-handling savvy who attempt the same at home? Besides, is there ever a reason – knowing what we know today – to be violent to dogs? Study after study demonstrates that the answer is simply “no.”

In this video (below) to me (and I bet any professional) he comes across as a well-meaning dude with good information, still there are ways in which a more seasoned pro can demonstrate. I know doing TV is hard – I do enough of it, and sometimes given another shot you’d want to put things slightly differently. But I could go through this video point by point and address concerns. Most notably about being a “pack leader” which perpetuates myths. We are not dogs and dogs know it. To be a good leader doesn’t have a thing to do with force.

Here’s a link to a petition which begins, We have spent over a decade fighting against the popularization of inhumane training toward animals on television. This type of commercialization for the sake of entertainment is barbaric and does not serve the general population and our most adoring companion animals.

A program promoting aversive/aggressive techniques to train when replicated by the public – which will happen – will only lead to MORE behavior problems, more bites, more dogs given up. And right now, the last thing we need to see on TV, is solving aggression (which is dogs is fear based) with aggressive and inhumane methods. Solving aggression with aggression also teaches children wrong lessons.

I don’t know Mr. Leverette, and hope I am wrong, and that somehow Netflix Canine Intervention took a misrepresentative twist on his methods in creating their teaser video.