If humans think that they are so superior that they can do whatever they desire without consequences, hopefully this pandemic proves those wrong. In fact, FAR more than any other species we control our future and hold the keys to our planet’s future, which is what Earth Day (April 22) is about.

Sir David Attenborough narrated a documentary you can watch on Apple TV+ in the U.S. The Year Earth Changed.  As our lives were put on pause, remarkable things began to happen in the natural world proving that if we choose we can control the health of the planet.

The pandemic, I hope, has also taught us several lessons, including the fact that we can matter to the health of the planet. Attenborough and primatologist Dr. Jane Goodall (in a conversation I had with Goodall in 2019) and many others have long warned that if we don’t change our ways, a pandemic is inevitable, beyond the first SARS (Sudden Associated Respiratory Syndrome) CoV-1 dead-ended in 2003; still 774 people died from 26 nations. From 2020 through April 21, 2021 over 3 million people have been identified to have died from COVID-19 (not to mention the number undiagnosed, especially earlier in the pandemic) and from every nation on the planet, which is caused by the current SARS coronavirus or SARS CoV-2.

While scientists still haven’t nailed down with absolute certainty the creation of the novel SARS CoV-2 virus, the most likely scenario is not that SARS CoV-2 was formed in a Chinese lab but instead began in a similar way which SARS CoV-1, associated with a so called wet market in China. This video from just over one year ago explains both the likely culpability of the wet markets but also why China is so resistant about just shutting them down (and also other nations in Southeast Asia where these markets exist, such as Thailand).


When I previously posted this video, I was attacked with comments about how people are sure (not certain non-scientists who have never been to China to investigate can be so sure) that the virus began in other ways, from a conspiracy to kill Americans to a laboratory which simply made an error. 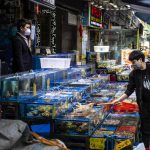 Even IF that is the case, the wet markets we KNOW are not hygenic, spreading at the very least salmonella and other illnesses. Diseases are also being spread to animals, often endangered and trafficked illegally according to international treaties. The markets must close in Asia, and viable alternatives need be found to replace them as sources of food and employment. I talked here with Kitty Block, president of the Human Society of the United States about all this, including America’s version of these wet markets which also must be shut down.

There still people who remain climate change deniers or believe humans have nothing to do with this natural cycle. That’s an opinion based on nothing; here are facts based on what is known including data.

Earth Day means nothing if we don’t participate, if we don’t act daily and don’t act politically. The fact that there was a year the earth changed means we can make a change, if we have the will do it.