Windy Kitty Cat Cafe should finally be open for business by the end of the month, thanks in part to the support of many readers of this blog who contributed to the effort.

Jenny Tiner, who began the effort, told me early on, “It’s just my dream.”

Dreams can come true, but, like cats, her project has had nine lives. She started with an online campaign; it moved slowly at first, but Jenny wasn’t about to be deterred, she kept going and ultimately raised enough money.

When another group came along and said, “We’re opening a cat cafe, too,” Jenny embraced them, because that is how she is. “More cats saved!” she said. Indeed the unique Catcade is a video arcade/cat cafe (which I have yet to see for myself), a concept different than Jenny’s vision of a more traditional cat cafe. And with, by one count, more than 100 cat cafes in North America, there’s plenty of room for two (or more) cat cafes in Chicago. 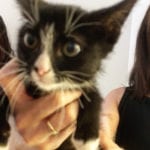 Adoptable kitty makes an appearance at a pre-opening party

Then the original space Jenny chose and was expected to go, upended her without warning, and she had to find another appropriate location (with the right zoning).

Well, Tiner found the purrfect location in Bucktown at 1746 W North Avenue. It happens to be in Alderman Scott Waguespack’s ward, and he is supportive, knowing the cafe will actually become a tourist destination. Jenny held two pre-opening events, which were fun, and now construction to transform this former retail space into a cat cafe has begun.

And the timing couldn’t be better. For various reasons, Chicago’s Animal Care & Control is struggling with too many kittens and cats. ALIVE Rescue will offer some relief by vetting the kittens and cats and getting them into the Windy Kitty for adoption. If Chicago ever needs another outlet for cat adoption, now is the time. 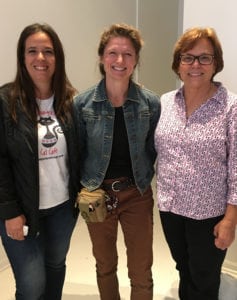 But another claw in ointment has occurred: vandalism. The entire front glass door was shattered. It’s not clear if this was a random act or someone who is aware of what this location will soon be, and this sicko hates cats. No matter, Tiner isn’t giving up, but she will have to find a way to pay to repair a shattered glass door. So, again your help is needed through this You Caring page.

Sometime late Sunday October 8th or early Monday morning the 9th the glass to our entrance door at the Windy Kitty cat café and lounge was smashed up by vandals. I just don’t get it. This truly broke my heart…? 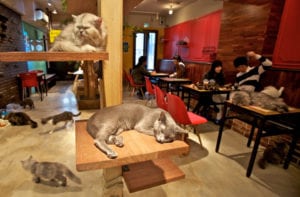 This has left me thinking about beefing up security at the cafe. I will be going above and beyond what I thought was enough, to protect the cats soon to be inside. Such a shame that I even have to worry. Who does this!?

We need to get the glass fixed TODAY. On top of fixing glass or replacing the door and installing a new one, we will be shelling out the last of a donation check we got this month for a variety of added security components. Your help would go a long way in righting this horrible act.
So, all that said, I hate to even ask for help but we need it. Any donations are appreciated beyond words.

The door may be shattered, but Jenny’s spirits are not.

If you prefer, you can help by donating an item from this wish list of items for the kitten nursery.