Veterinarians On Socialization Classes for Kittens

A kitten’s mind is a terrible thing to waste. “It all began when my clients in puppy classes wanted equal attention for their cats,” says Dr. Kersti Seksel, a veterinary behaviorist in Seaforth, New South Wales, Australia. “Kittens deserve an education too. 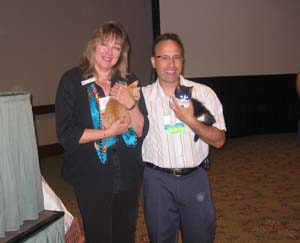 So, about a decade ago, she began offering what she called Kitty Kindy, The one hour to 90 minute course meets twice, and it’s exclusively for kitties seven weeks up to 14 weeks.

“I’ve had cats my entire life, and I’ve never heard of anything so ridiculous,” says a manager of a pet store in Madison, WI. “It’s an idea for yuppies who have nothing else better to do.” To be sure, he’s not the only one who thinks this way.

A few years back, Dr. Illona Rodan heard about Seksel’s tutoring for tabbies; she immediately imported the curriculum from Down Under to her feline practice in Madison, WI. “I’m sure people thought I was a little crazy,” she says. “But I knew these classes would save lives. The number one cause of death in indoor cat’s isn’t heart or kidney disease, or cancer, it’s people who give up on their cats’ bad behavior.”

“I learned how to teach Jasper to fetch,” proudly touts James Schuelke, a 27-year old factory worker in Madison who took the class in the fall of 2003.

Even though he says Jasper’s since forgotten how to fetch, Schuelke says he’s glad he went to kitty class. “I learned about why you shouldn’t play with your cats using your fingers.”

“It may be cute when they’re little kittens, but it’s not so cute when adult cat biting hard on your fingers,” instructs Angela Martin Licari, a certified veterinary technician who shares the teaching duties with Rodan.

Veterinary behaviorist Dr. Karen Overall, a researcher in the psychiatry department at the University of Pennsylvania School of Medicine, Philadelphia, PA

says, “Let me share a tragic truth that know one talks about; millions of cats don’t get the kind of physical exam they should. In fact, cats don’t, on average, visit the veterinarian as often as dogs.”

Symptoms of heart disease in cats are a murmur and rapid heart beat. If a cat is so traumatized, there’s no way to determine what the true heart rate is, or to hear a murmur. Vets have to guess if high blood pressure is a result of stress or if it’s a symptom of underlying disease. Similarly, off the wall blood glucose levels might be a sign of diabetes, but might also be to the ordeal of visiting the vet.

Typically, these Kitty Kindy’s take place at a vet office. Seksel says, “At this young age, all you need to do is drop some treats in the carrier. Kittens are happy to jump inside. Now, a visit to the vet office is like a party; there are toys and treats, and other cats to play with.”

Rodan, who is also a past president of the American Association of Feline Practitioners, says Freddy was a kitten who began scratching in all the wrong places. The owners were furious at Freddy.

Rodan says, “At least with dogs, if you don’t seek help from your veterinarian for behavior issues, there’s your dog trainer. For cats, people never had an option – now, there is one. And even better, that person is a veterinarian or someone working in conjunction with your vet. As a part of the class we answer specific questions, but we certainly explain that all cats need to scratch. We discuss scratching posts. Freddy had a post, which is why the owners couldn’t understand what was happening. But the post was carpet, and Freddy didn’t like using it. When the owners replaced it with a post wound with sisal, and re-located the cat scratching post away from the litter box, Freddy was very happy to use it.”

Rodan says that if she wasn’t available as a resource, the situation may have worsened, and the bond between the family and Freddy could have disintegrated, with Freddie landing at a shelter.

Rodan is so sold on the idea of classes for kitties; they’ve been included in the American Association of “Feline Practitioners Behavior Guidelines,” which she co-authored with Overall (free to download: http://www.aafponline.org/resources/guidelines/Feline_Behavior_Guidelines.pdf).

With vets all over America reading these guidelines, kitty classes are bound to catch on.

Maybe. One veterinarian sure doesn’t think so. “Cats don’t want to go to school,” say Dr. Marilyn Mikiciuk, an internal medicine specialist in Alsip, IL, and former president of the Chicago Veterinary Medical Association. She says she’s also worried about infectious diseases being passed from kitten to kitten. “You’re opening a Pandora’s Box,” she warns.

Rodan response is that all cats must be vet checked before enrolling. What’s more, all kitties are hand-inspected for fleas and ringworm before they’re allowed to interact with the other students. If a litter box is used during a class, it’s immediately trashed.

Seksel, whose been offering the classes the longest says, “I’ve never had a health issue. In fact, it’s just possible these kittens actually build their immune systems stronger with exposure to others.”

Mikiciuk isn’t convinced. “What if one (kitten) test is negative for feline leukemia, the cat goes into the class, and then a second test a few weeks later shows positive? It can happen you know.”

“Rubish,” says Dr. Ian Dunbar, of Berkeley, CA.  “Sure, that can happen. Anything can happen. The reality is that more cats die because they scratch in the wrong places or miss the (litter) box than of feline leukemia.”

Dunbar, a veterinary behaviorist and certified applied behaviorist is credited with pioneering the concept of puppy kindergarten classes in the late 1970’s into the1980’s. He says in some ways socialization classes might even be more beneficial for cats. “They’re indoors their entire lives, and that’s fine so they don’t get killed by cars. But they need things to do. Being socialized to go out into the world on a harness or in a carrier is wonderful.”

“The vast majority of indoor cats suffer terminal boredom,” adds Overall. “Some cats take their anxieties out on the drapes or on themselves (behavior problems like compulsively licking themselves), but most just vegetate, transforming into overweight couch potatoes. They eat, and if you’re lucky, they use the litter box.”

It’s not only a matter of teaching cats tricks. In her class with Rodan, Vicky Freyber of Madison, WI taught her kitty, Cali, to keep out of her houseplants.

Sherri Ruppel in Chicago adds, “I know if I had the opportunity to socialize Bates when he was young, he would be less anxious and far more sociable today. It would be worth a lot, I mean Bates is okay – but he’s sure not happy whenever something out of the ordinary happens, or even when I have visitors.”

Don’t worry about applying for a scholarship, the cat classes are generally inexpensive. Rodan doesn’t charge her own clients a fee, others pay $10.

Seksel agrees and says graduates of her Kitty Kindy tend to be more sociable, and better understood by their owners.

Who knows, maybe some day Americans will import Vegemite too.