World’s Largest Dog Wedding, Throwing Out of the First Pitch with Hazel the Dog Listen HERE as CEO, President and Owner Bob Froelich of the Kane County Cougars appears on Steve Dale’s Other World, WGN Radio to officially announce he will host the second attempt to break the record for the world’s largest dog wedding called Diamonds in the Ruff. The event will be October 2 at Northwestern Medicine Field in Geneva, IL. Last year, the effort came close in Villa Park but didn’t quite make it, in part, because there wasn’t enough space. In Geneva at Northwestern Medicine Field, there’s tons of space – just bring the plastic bags. Dr. Bob explains that proceeds from the World’s Largest Dog Wedding, Diamonds in the Ruff, go to non-profits. And the prediction is that 1,000 dogs will get married. The principal charity is K9’s for Warriors, which is a non-profit that provides service dogs for veterans. 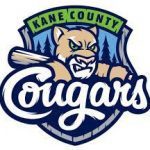 On July  26 at the ballpark there will be doggy speed dating – after all, you should date before getting married. And the first pitch will be thrown out by me.

Dr. Bob (as he’s called) talked about why he took over the team, and about how he has long supported the community. Also, how there are so many kid events happening that are associated with all the ball games, far more kid friendly not to mention affordable than major league baseball. Thirsty Thursdays, everything is $2, a beer, a soda and a hot dog – each is $2.