You’re Out! A Movie Dispelling Myths About Pit Bulls 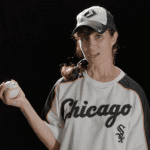 Listen HERE to my Steve Dale’s Other World Sunday afternoon program to Animal advocate Sandy DeLisle who is now on her way to producing a movie, made in Chicago with Chicago talent, called You’re OUT!

She explains the story involves a pit bull type dog that no one wanted, and was rescued along the way on a cross country road trip with two dads taking their two sons to get them recruited for college baseball teams.  DeLisle says this is National Lampoon Vacation meets baseball movie meets sweet and touching dog story. It’s the best of all words!

The only issue is to pay for this movie. So, she’s launched a crowdfunding campaign.

Contributing to this film is a contribution to independent films and one made in Chicago.

Sandy tells me now retired Chicago White Sox organist Nancy Faust will be in the movie, and I will be too. Not sure what role I will play, maybe a dog trainer or a radio host?